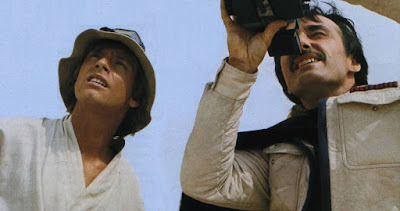 Why it might be hard to identify with Luke:
Connect
Care
Commit
Five Es
Rise above
High five a black guy
Kind

Never realized that Luke showed up so late in the timeline before. I wonder how much BCI/CCC applies when there's a protagonist switch, such as in Psycho? Or is the audience's investment, once received, transferable without qualification?

Also, hadn't made it back that many years in the blog yet. Absolutely epic analysis by James.

I would say it's definitely not transferable. Whenever there's a protagonist switch, the writer has to start over from scratch. I've always loved how thoroughly we switch in Psycho. When the car goes into the swamp and then bobs out again, we don't think, "Oh good, the bad guy who killed my hero is going to get caught," we think, "Oh no, my new hero may get caught!"

And I forgot to post my response to James: http://www.secretsofstory.com/2014/10/my-response-to-james-kennedy-why-do-we.html

Luke played with a toy plane, that's good. I forgot that. That's the easiest way to foreshadow his x-wing piloting later. W