Believe, Care, Invest: Our Choice of Heroes in George R. R. Martin’s “A Game of Thrones” 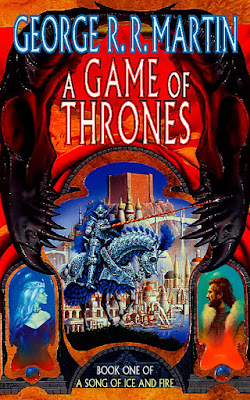 Massive spoilers for the book series and TV show! Skip to the next chapter if you don’t want to know how it all ends!

It’s fascinating to re-read this first chapter, knowing what we know now.  For the past twenty years, readers have been saying to themselves, “Why do we start with Bran?? He’s such a minor character!” Little did we suspect that he would win the game of thrones! Maybe Martin knew what he was doing all along.

But before we get to Bran, we start with a prologue. As with “Hitchhiker’s”, these pages are not yet identified as “Chapter One”, so we sense that we need not fall in love with these characters, but this prologue is longer, so if we didn’t find the characters and situation compelling we’d probably stop reading.

Ultimately, we will realize that these opening pages prefigure the whole series. Our POV character watches as a grizzled old veteran ranger, whose sword is “nicked from hard use,” is led into disaster by a “lordling” whose sword has never “been swung in anger” (the ultimate insult in this manly world). Over the course of the next three books, both the North and South of Westeros will be led into disaster by too-young lords that are ill-prepared for leadership.

We never find out enough the prologue’s POV character Will to Believe-Care-Invest, but we certainly do so for the veteran Gerad, who gets lots of details, suffers mightily, and shows his clever skills. We even come to appreciate the lordling Royce who, in a nice ironic turn, dies bravely. We sense that these aren’t our heroes, and don’t really invest our hopes and dreams in them, but we can tell from these pages that Martin can make us identify with heroes, if he wants to, and we trust him going forward.

Another thing this intro establishes is Martin’s greatest strength: his ability to put the audience on an emotional rollercoaster. Over and over in this series, Martin will fool the reader into thinking that the heroes will triumph, only for something awful to happen. The most essential line in this introduction is this:
That’s a dead-simple trick that any writer can use: Just insert that line into your book, as often as possible. Lift the reader up, then cut them down. Martin has a curiously sadistic relationship to his readers. Perhaps more than any other popular writer, he really likes to torture his heroes (to death), which also tortures the readers who love those characters …but we love him for it. He triggers a pleasurable masochism within the reader. Every time Martin tricks us into daring to hope, then viciously punishes us for it, we get a thrill.

But we still haven’t met any main characters, so let’s move on to Chapter 1, which is named “Bran.” Right away, we start getting a little nervous: We find out in the first paragraph that Bran is seven years old! Is this a kids book? It doesn’t seem so from the page count. Martin is basically counting on us to flip ahead and see that the book’s 73 chapters will be credited to 8 different third-person POVs, and Bran will only get 7 of those chapters. We sense that Bran is not going to solve the book’s big problems, so we need not fully invest our hopes and dreams in him.

So Martin has a tricky task, we’re meeting our main cast now, but we’re meeting them though the POV of a (seemingly) minor character. His goal in the first real chapter is to get us to believe in and care for this family, and then, through Bran’s eyes, search for some member of the family other than Bran that we can invest our hopes and dreams in.

Believe In: After reading the prologue we already believe in the reality of this world. Martin is mostly Italian-American and grew up in a New Jersey housing project in the 1960s, and yet he convinces that surely he must have lived in medieval England at some point with his wealth of detail.

And Bran is a believable seven year old: Eager to be included in adult things but anxious about what he might see. We are told it’s been summer for nine years but winter is coming, so seven year old Bran is about to know the cold for the first time, which is a metaphor for the chilling step into reality we all must take on the brink of adolescence.

Care For: This is tricky because Bran is not suffering all that much. Sure, he feels cold, and he’s being forced to watch a man being beheaded, which disturbs him, and later he almost has to watch some wolf-puppies put to death... but the real reason we care about Bran is because we sense, from reading the prologue, that the ice-zombies will eventually come for him, and he’s so terribly unaware of this. (In fact they will come just for him, though those who stick to the books may never find that out). We care for him because we can see what he can’t see.

The novel’s multiple-POV structure ensures that we will always know more about what’s going on than any of the POV characters we’re reading about, not just plot-wise, but also morally. We know from the prologue that the deserter had a good reason to flee, which none of the Starks bother to elicit. Each POV-jump for the rest of the book will follow this pattern. There will never be a character that understands this world as fully as the reader does. Only we can see the ironic contrasts between these points of view. Only we know how tragic all of these events truly are. We care about these characters in an almost godly way: What fools these mortals be.

Invest In: We’re in an odd position: We discover that we were correct not invest our hopes in any of the characters from the prologue, and we can’t really invest in a seven year old boy, but we can tell that the Starks are going to be our main characters, so we examine them through Bran’s eyes, looking for a hero.

The most obvious choice is Eddard, who seems like a manly and responsible Lord in his insistence on being the one who swings the beheading sword himself. And if we’ve flipped ahead, we know that he will have the most POV chapters. But we also can see that Eddard has a limited perspective. He dismisses what Will has to say without really listening, leaving his kingdom eventually vulnerable to zombie attack. And of course, as fantasy readers, we’re conditioned to seek out young heroes so we’re also looking at his sons, whether adopted, blood, or bastard.


But it’s not so easy to choose between Eddard’s bastard son Jon or his official heir Robb:
In the introduction it was easy enough to choose between the two men that were being described: Gerad was full of manly virtues and the lordling Royce was not. Here, it’s harder: Robb and Jon offer two different visions of manhood that both seem equally appealing at this point. Ultimately, we (correctly) invest more in Jon, because he perceives more of what we know, and shows more compassion to Bran, but it will take three long books before we can be sure we’ve made the right choice.

Of course, on some level, the moral of the prologue lingers in our minds: Don’t trust lordlings like Robb. They’ll get you killed.

As with any fantasy author, Martin is asking a lot of his readers: He’s asking us to commit to a long book with lots of characters. In the end, this book will not end satisfactorily, demanding we read the next and the next in a search for satisfaction that will never end, because it’s more than two decades later and it seems likely Martin will never finish the book series.

Ultimately, there’s only one reason to read this series: Because it is pleasurable to read each chapter. Martin will not honor the pledges that most authors make to their readers, but we will forgive him for that, because the books are so enjoyable.
Posted by Matt Bird at 12:00 PM

I started latching onto and approving of Jon as soon as he said Ass. Of course the next sentences as you say reinforce our identification too, but that first word, clever. My brain thought Greyjoy was an ass, and Jon thought so too! Also, hero Jon doesn't shout it or directly chastise Greyjoy. I suspect he's not annoyingly aggro. He's competent.

Haven't seen the TV show or read the books. But even with just reading the paragraphs posted here, Jon still seems worth reading about. Neat! Jan 5 2020

(Although I heard Jon dies, so perhaps his own judgment of others gets the better of him. Maybe he is a bit aggro. May have looked too deep into "Ass, Jon muttered", knowing something about the ending already. But, based on this introduction, it really does seem like we should invest in him.)

Interesting to think how the 'he dared to hope' line translates visually in the show as well. What I think makes the Season 4 episode with the Mountain's duel against Oberyn so impactful even when rewatching is that cutaway when you see Tyrion silently cheer. It's a very small moment, but you get carried away and feel that preemptive triumph with him, and it's so much more painful when you're proven wrong.