Believe Care Invest: Sethe and Others in Toni Morrison’s “Beloved” 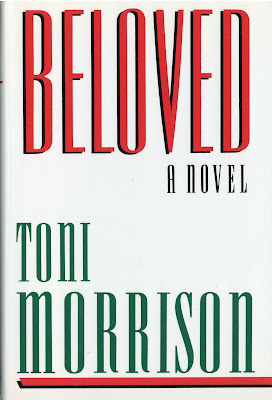 Like all of the other books in this section, this was a bestseller, but unlike those, it won its writer a Pulitzer and Nobel Prize. It’s a tough read about the most painful fact of American history, but it’s also a compelling ghost story. It has horrific atrocities, but it’s also, in some ways, an uplifting love story. You can read it in high school, or a book group, but you can also write a dozen doctoral theses about it.

Believe: Morrison has a lot of big jobs in front of her. As with any novelist, she must describe thing with unique similes we haven’t read before (a gravestone is “pink as a fingernail”), then she must make the 19th century come to life with details unique to that century (slop jars, a kettleful of chickpeas, the house’s “keeping room”), then she must make the horrors of slavery come alive (the scars on Sethe’s back are in the shape of a “chokecherry tree”) and ideally she can do all three in one phrase, such as when we hear that one of Sethe’s memories is “as lifeless as the nerves in her back where the skin buckled like a washboard”

Morrison’s utter unique character descriptions are perfect models of efficiency. Here’s how Paul D. sees Sethe: “A face too still for comfort; irises the same color as her skin, which, in that still face, used to make him think of a mask with mercifully punched out eyes.” Here’s how Sethe sees Paul D: “Except for a heap more hair and some waiting in his eyes, he looked the way he had in Kentucky. Peachstone skin; straight-backed.”

One way to make characters feel unique is to give them things they won’t normally do, and then we know the significance of a change in that behavior. Denver notes that Paul D. is “someone her mother wanted to talk to and would even consider talking to while barefoot.” Sethe has unique values that define her, and then she makes an exception, showing how these events are shifting her world.

Already in these first ten pages, we totally believe in the reality of this world. We sense that Morrison surely must have been there in person to have noticed all these odd little details that no one could just make up.

Care: On the one hand, these characters are very easy to care about. They are, after all, the victims of America’s greatest atrocity. Who in our history has suffered more than they? But Morrison knows that it’s hard to conceive of the horror of slavery. Most of her readers had seen “Roots” ten years earlier, so they knew about the vicious whippings, the omnipresent rape, and having your children sold away from you, and they were inured to it. But of course slavery is an unending fount of horror, and Morrison used her research to gouge through the calloused skin of her readers and make the wounds fresh.

Sethe’s mother-in-law Baby Suggs has had all of her eight children taken from her. How can we conceive of the magnitude of that? The horror comes alive when she says, “My first-born. All I can remember of her is how she loved the burned bottom of bread. Can you beat that?” The fact that she only has one memory of the toddler that was taken from her is staggering, but the memory is fascinatingly bizarre (and thus convincing). Likewise, Morrison knows she must confront the reality of rape, but she must make the horror fresh. For Sethe, what made it so horrific was that she was nursing at the time and “they took my milk.”

In the modern day story, things are going better for Sethe, as a lover emerges as if from nowhere and eases her burden a little, but we only believe in this relationship because it’s not as easy as it should be. Sethe is amazed to see Paul D. and asks “Is that you?” to which he honesty answers, “What’s left.” Later, she says, “You could stay the night, Paul D,” and he parries with “You don't sound too steady in the offer.” Neither feels entitled to happiness and they’re wary of it. She recalls that he’s always “treated her to a mild brotherly flirtation, so subtle you had to scratch for it.” Even when the romance develops quickly, as it does in this book, always make your heroes scratch for it a bit, and we’ll care about the relationship so much more.

Invest: Of course, the ghost story of course also need unique details, to separate it from a million other ghost stories. Here the ghost-baby picks on their poor dog, which is named “Here Boy”, and Denver remembers Sethe’s fierce reaction:
We will read much more about the remarkable (and occasionally disturbing) resilience Sethe has shown over the years …but do we really invest our hopes and dreams in Sethe in these opening pages? Not really. And we’re right not to do so. About half of the book takes place in flashback, and in those sections “iron-eyed” Sethe will show epic heroism, but in the modern day story, Sethe has lost all willingness to stand up the vengeful ghost that rules her house, and she will continue to cling desperately to it even past the book’s climax where Beloved is finally banished.

No, in these opening chapters, we invest our hopes in Paul D, which is easy enough to do, as he shows traditionally manly traits and stands up to the ghost right away:
That’s pretty easy to invest in. But, as it will turn out, Beloved will return in the flesh, and Paul D, too, will ultimately be unequal to the task of defeating her for good.  It is meek Denver who will do what is necessary to purge Beloved from the house, but we don’t sense that yet, which is fine. As long as we have characters to root for early on, we don’t mind if the real hero turns out to be one we didn’t pick.
Posted by Matt Bird at 8:33 PM