Storyteller’s Rulebook: Sometimes the Hard Way is the Bad Way 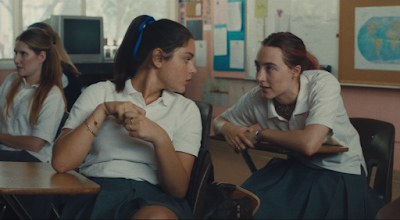 In my recommended structure I sum up the second quarter as “the easy way” and the third quarter as “the hard way”. The hero has a problem to solve, commits to it at the ¼ point, tries the easy way for the 2nd quarter, expecting a quick resolution, then everything culminates in a big crash at the midpoint, so the hero starts over again a little wiser, identifies a better and harder way to solve the problem, fails again at the ¾ point, finally adopts a corrected statement of philosophy, sets off on the real right path, and heads off into the finale.

So usually the hero is trying a better (but still not best) way in the third quarter. But not always. “Lady Bird” shows us a not-uncommon tweak on the structure.

The titular heroine still tries the easy way in the second quarter, has a big crash, tries a harder way in the third quarter, fails again, then gets on the right path, but in this case, the easy way was naïve-but-admirable, and the hard way turns out to be the bad way.

But the structure still works: It’s still the case that she’s working harder and more resourcefully and accomplishing more. The only difference is that, in conjunction with that change, she loses her moral compass.

This puts the audience in a tricky relationship with our heroine: We love her, so we’re hardwired to want her to get what she wants. In the second quarter, that’s no problem, because we love everything about what she’s doing. We love her best friend Julie, we love that she’s decided to fix her life by starring in a Sondheim musical, and we love her love interest Danny.

But then, in the big crash, Danny turns out to be gay, so we’re glad she moves on, and glad that she decides to be more active and canny in the third quarter, but, suddenly, she starts alienating us along the way. She cruelly ditches her best friend and the theater program, pursues a friendship with a mean popular girl and a relationship with a cool, anarchistic boy.

We quickly realize after the midpoint, “Whoa, I still love Lady Bird, but I no longer want her to get what she wants. I’m rooting for her to fail, or, if she’s going to succeed, to make it out the other side of this and be reunited with her original decency.”

And that’s what happens: She cannily befriends the bad girl and beds the bad boy, but then she ditches them at the last moment and runs back to her previous best friend. She gets a corrected statement of philosophy and gets her life back on track, so then we can fully root for her again in the final quarter.
Posted by Matt Bird at 8:00 PM

Great article Matt. It's nice to see how robust your techniques and ideas are as most generic story systems would struggle with a low-stakes coming of age drama.

I have one question - Is it possible for the hero's philosophy to be correct from the beginning (although ironically) and the change comes through their attitude instead? Or would that be messing with their personality, which should remain constant.

Personalities don't always have to remain constant. Usually, the hero's philosophy and/or tactics change and not their personality, but sometimes, especially in stories set over a long period of time, the personality can change. Certainly in childhood-to-adulthood books like David Copperfield or The Goldfinch, but even in movies set entirely in adulthood, as with Tom Cruise in "The Color of Money".

I'm trying to think of movies where the hero starts out the movie with a correct statement of philosophy. In all 25 movies we've looked at, they start out with a false s.o.p. But I'm sure there are some great ones. Maybe Captain America: The First Avenger: "I can do this all day."

Perhaps it's semantics, on closer inspection there is a slight change of one of her key philosophies, while the another is more of an outlook on how the world is. Would that be considered an ideal rather than a philosophy?

PS - ordered your book a few days ago, looking forward to its arrival.

Slight tangent, but how does the easy way/hard way structure play out on TV? A TV character can't change their philosophy in every episode. I assume it would also be tedious to watch a character employ their default strategy to poor results for 20 minutes a week. What does the nature of episodic storytelling do to the model?

I think the viewer actually does want to watch a character employ their default strategy to poor results for 20 minutes a week. We want to see Eleanor try her id-based approach for the first half of a "Good Place", then realize that's failing for her yet again, go to Chidi, get some moral instruction, and finally do the right thing to solve that week's dilemma.

We want to see Jimmy try his classic tricks in the first half of "Better Call Saul", realize he's screwing up again, adopt a better philosophy and solve that week's dilemma. (Although that show might be just as likely to do the reverse: With Jimmy trying to do the right thing and grow for the first half, realize at the midpoint that he'll have that he'll have to backslide to get what he wants, and devolve to "Slippin' Jimmy" in order to get what he wants.)

Speaking of that universe, another old post, about how you find the whole structure in just one scene: http://www.secretsofstory.com/2012/09/storytellers-rulebook-146-every-scene.html

Ah yes, classic posts! Thanks for the reminder. Your broad overview of TGP and BCS illuminates something fundamental about the TV dynamic. The lead character's key flaw and strength will directly create the structure of every episode. So theoretically, if you can get those traits right and situate the character in the environment where they're the most relevant, you have a show. "It's that easy."