The Book that Breaks All the Rules, Part 6: Only Name Important Characters 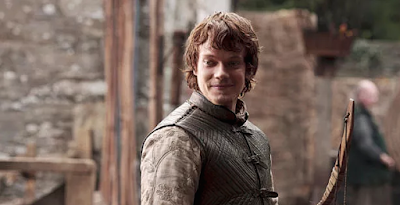 When we start “A Game of Thrones”, we’re quickly overwhelmed with names. Why does Ned have to take twenty riders with him out to chop off this man’s head? Couldn’t he have taken six? And a lot of them get names and some dialogue, even though we’ll never hear from again:


Couldn’t he have just given that second line to Hullen? Why does the horse master’s son, who we’ll never see again, have to be in this chapter?

Well, don’t worry, if you get confused as to who everybody is, you can simply turn to the appendix at the back, right? If you do, you’ll find yourself buried in hundreds of names. At times, the sprawling story resembles Gabriel Marcia Marquez, but at least Marquez kept his cheat-sheet down to one page. Like Marquez, Martin is already repeating names in the first chapter (Robert and Robb)

Does it get away with it? Yes and no. I’m notorious bad at keeping up with these sorts of things, and I suspect that the only reason I was able to follow the book was because I’d seen the TV show first. I’ll never know if this would have been a dealbreaker with me or not.

But I can see that Martin does everything in his power (short of, you know, telling a simpler story) to help us keep track of everybody. He does this through an old trick that goes all the way back to grey-eyed Athena: He uses consistent descriptive language over and over. Let’s look at Theon: He’s introduced with “Theon was a lean, dark youth of nineteen who found everything amusing.” That’s a great character description we haven’t heard a million times before. Then after that we get:


Each character is strongly characterized. The important characters are well-distinguished from each other and come alive.

Once he’s done the gargantuan task of getting us to understand who everybody is, the number of characters becomes a strength, not a weakness. This world feels real and lived in. It sprawls, but that means that we enjoy sprawling out in it.
Posted by Matt Bird at 8:00 PM

His ability to characterize minor characters is something he does with mastery. I've dug hard into his books to see how he manages to make a character jump off the page in just a few words (sometimes--certainly not every time) -- and in truth it's elusive.

I remember one scene I think is in Book Two - at Harrenhal, where he's describing a whole cast of Brave Companions (is that not a stunning name for them?), and he tells us of one with some specific scar and a certain cast to his expression and I thought, Oh, I know that guy.

How the heck do you do that?

Another good example from the first book: the woman who runs the inn where Catelyn stops is always chewing some root that stains her teeth, which is mentioned several times. Again, not a detail we’ve seen a million times, one that feels medieval, and one that speaks to the depth of detail in his world.

I read the books before watching the show, and although I very barely picked up on every single character, it kinda worked at some points. So when Bran sees Cersei and Jamie in the tower, I had no idea that they were siblings, or that it even was Jamie - he was just described as "the blonde haired man" or something to that effect. When it actually got to Ned finding this out, it was a surprise for me too. I don't actually know how deliberate it was on Martin's part, or if I automatically assumed it was someone other than her brother.

Oh my! Not a danger for me because I saw the show first. Even from Bran's limited POV, there are ways to let the audience know which two characters these are, so I think that was Martin's failure, not yours.

I read the books before I watched the show and had no problem keeping up with the main cast. That said, once it gets past book 3, there are way too many characters, and I get lost with some less important names. I feel like when my father starts talking about a distant cousin I'd never heard about, and I'm like "yeah, yeah", cause at the end of the day, knowing who exactly this person is won't change much of the content.

I think these many characters create a vivid, lively picture. We get a sense of this large community in Winterfell, before everything happens. Also, in a way, sure, he could just say that there are 20 man with Ned, but by having dialogue here and there we get a sense of the number of people. In a movie you can show 20 people, in a book, if you simply say that there are 20 people you're not really painting a vivid picture. GRRM uses visual details here and there. Other than that, frankly, sometimes the descriptions go overboard.