Storyteller’s Rulebook: How to Write a Great Villain Introduction 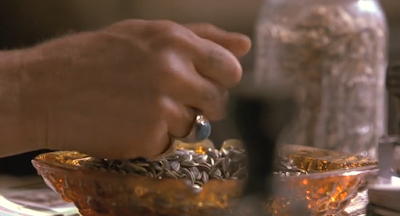 Last time we looked at how we came to believe in, care about, and invest in Stanley, the hero of “Holes.” Now let’s look at how we end up doing the same thing for a villain, all in one paragraph.

Stanley has been driven out to a desert prison camp by a bus driver and guard and he’s being dropped off with a warden. Then the guard notices something:


With a hero, obviously, we invest our hopes for a happy ending. But with a villain, we also have to “root” for him to be a good villain, and the hat and tattoo do that. Sure enough, further down the page, Stanley gets to know him:


He then denies Stanley badly-needed water, we’re going to primarily boo-hiss him, but our enmity will be strengthened, not lessened, by our belief in him as a human being and our understanding of his one weakness. This is a real villain, not a fake one, and he’s all the scarier for that.
Posted by Matt Bird at 8:00 PM