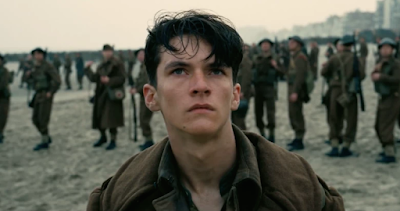 I didn’t see this movie until it came out on DVD, and I knew very little about it. All I knew was that it was written and directed by Christopher Nolan, that it had four movie stars in it, and that it told the story of the Dunkirk invasion in many locations: on the beaches, in the air, and on the water. Based on these three facts, I naturally assumed that it was going to be another bloated 3 hour mess, with lots of Churchill speeches, etc.

It wasn’t until I got the DVD in the mail that I was shocked to see a 106 minute runtime. Had Nolan actually made a non-bloated movie?? When I watched it, I discovered that it did have some of Nolan’s usual problems:


But the movie works, and even Zimmer’s score works. Because so many stretches of the movie were dialogue-free, Zimmer had enough room to play, for once. How did Nolan make such a slim, elegant movie, after making so many messes?