The first of many pieces based on the brand new checklist.

It was 1977, and America was depressed. We’d just lost a war, and, even worse, deep down where we wouldn’t even admit it, we suspected that we had deserved to lose...that we had been the bad guys. As widespread as this suspicion was, few felt that they could say it out loud, for fear of plunging the country deeper into acrimony.

Then an amazing thing happened: a great work of art came along that began the process of healing that wound...a movie called Star Wars. In the movie, three American movie stars played scrappy young rebels taking on a massive empire. The empire kept using its advanced technology to track and slaughter the rebels, leaving smoking villages filled with charred corpses...but a rag-tag band of farmers and outlaws won out by hiding in jungles, infiltrating the enemy army, striking fast and scattering quickly, all the while drawing strength from a meditative, church-less spiritual force.

George Lucas was giving America a chance to empathize with our victims, and refight the war on their side. Years later, when America had swung back in a more reactionary direction, Rambo would return to Vietnam and famously ask, “Do we get to win this time?” But George Lucas had already given us a chance to win...provided we were willing to switch sides. As they watched Star Wars, Americans happily made that switch, and felt that their souls were a little bit cleaner.

Now let’s jump ahead a few years: it was 1984 and America seemed to be on the edge of nuclear war. Few could imagine a bright future. In The Terminator, the Soviets became giant robots, and nuclear war became a robot apocalypse, but the implications were clear: we were caught in closed loop that only had one end. “A storm’s coming.” “I know.” There was nothing left to do but ride off into a sun-drenched desert to prepare. 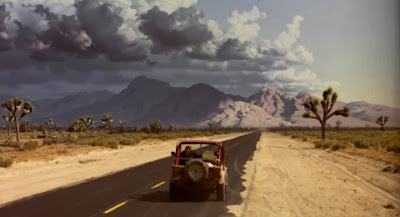 Cut to eight years later, and writer/director James Cameron updated his fable in Terminator 2. The big, scary, deep-accented robot broke out of his programming, now determined to destroy his own side’s weapons and break the loop, even if it meant destroying himself in the process. In the end, we are back on the highway, but now it is dark, and we have no idea what awaits us down the road: We’ve been sure of the coming doom for so long, can we handle the freedom of not knowing what the future brings? 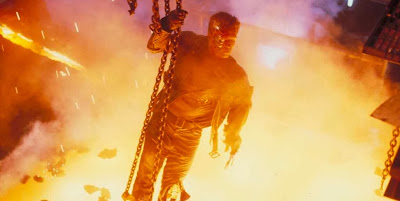 Nobody walked into these movies expecting any political content, and even afterwards most remained blissfully unaware of the movie’s deeper implications...all they knew was that these movies had resonated with them on a much deeper level than many other blockbusters.

Those movies were all science fiction, which is the most allegorical of genres, but all movies become more meaningful when they include twinges of real-life national pain. Let’s look at the eight movies that I evaluated with the last checklist:
I’ve said before that you can’t count on your audience to bring their sense of morality into the theater with them, but you can count on them bring their fears, pain, and doubts. They don’t want to think directly about those things, but you can add great resonance to an otherwise apolitical (or lightly-political) story by indirectly referencing them.  This is true even for comedies, because comedy requires pain.

The trick, of course, is to avoid hypocrisy. As I pointed out before, The Avengers tacks on a subplot in which the Avengers protest the fact that SHIELD is using an alien device to make weapons instead of clean energy...but the team members all love their own weapons, and nuke their enemies out of existence at the end without an ounce of compunction. By contrast, each of the eight movies listed above, though very entertaining, deals with its painful national wound in a serious, non-hypocritical manner.

If you want your story to be more meaningful, you should feel your country’s pain...but don’t exploit it.
Posted by Matt Bird at 10:52 PM

Sounds good, but those are classics. They long outlived their political atmosphere.

I love Star Wars, The Terminator, and Silence of the Lambs - but I never experienced any of those events.

I'd suggest the fan base of Star Wars would be 95% people who are either too young or not from the US, yet they love it all the same.

My interpretation of Star Wars is that it's a metaphorical coming of age story. A bunch of rebellious friends versus an all-powerful authority figure. No coincidence the empire is represented by none other than Luke's father.

The same metaphor is used all the time in movies like The Matrix, Serenity, Pirates of the Caribbean, etc - The phase of life where you transition from having your life run by your parents to going out on your own is one we all share. Much more common than a powerful government.

Star Trek 6: The Undiscovered Country is one of the often over looked films in the series but does a great job of looking at the end of the Cold War through the change in relationships between the The Federation (the west) and The Klingons (the Russians).

Jasmine: One result of these movies is that they allow these events, and the cautionary tales learned from them, to not be totally forgotten. When Americans today first read of My Lai, or Ted Bundy, we can feel a little of the chill because we've been put in versions of those situations by movies from that time that we still watch.

QED: I agree, and I love that movie.

I have to agree with Jasmine. Who knows if we'll still be watching BRIDESMAIDS in another ten years, but the appeal of the films you've listed that are truly time-tested transcends their zeitgeisty first impressions. I just rewatched Preston Sturges' SULLIVAN'S TRAVELS (from which I know your blog takes its name) with a younger relative who was seeing it for the first time, and we both loved it even though our experience couldn't be farther removed from the Great Depression.

I don't know about you, but if anything the first two TERMINATOR films only grow in their impact with every passing year. Because, while they may have been tapping into Cold War angst upon release, that reading strikes me both as superficial and as not taking the films seriously enough on their own terms. The whole mythology of those films is based on a realistic fear of the next logical step in the progression of machine technology. Without getting all Unabomber about it, the Singularity is coming and it doesn't care about us humans. One day sometime in the next 50-100 years, it's very likely that a computer will come on line that's roughly as intelligent as the most intelligent human. And who's to say that when this real-life HAL is born it won't choose to also become Skynet?

But I would say that the best way to be timeless is, paradoxically, to be topical.

Compare a timely-but-timeless classic like "Sullivan's Travels" to "O Brother Where Art Thou", a movie that I greatly enjoyed at the time but which I can now barely remember. That movie had nothing to say about the year 2000, since it was entirely focused on abstracted and (literally) filtered memories of other movies/songs/novels about another time entirely, so there should be nothing to "date it", but it nevertheless feels out-of-date in my mind.

"O Brother" was a smart commentary on the myths and meaning of the Great Depression in pop-culture, but it had little to say about the actual Depression, and nothing to say about the culture of its own time. The problem is that attitudes towards pop-culture are far more ephemeral than attitudes towards real events, so movies about pop-culture (including "Pulp Fiction" which I just rewatched), date the worst of all, while movies that reference real topical events, like the "Terminator" films, as you mention, get stronger every year.

It might be useful to make some kind of distinction between authentically timely (and therefore ultimately timeless) vs. merely topical.

Take FIRST BLOOD (both the novel and the film) vs. RAMBO. The latter might reflect a Reagan era fantasy of resurgent U.S. power getting a Vietnam do-over, but it's facile and forgettable and nobody but a grad student writing about 1980s cinema wants to rewatch it now. FIRST BLOOD, on the other hand, actually does grapple with the real pain of a vet returning from fighting a losing war. He's got PTSD, the deadly skills of a Specal Forces soldier, an alienation that makes him feel more at home in the forest than on main street, and a chip on his shoulder for being treated by the cops like the dirty hippies who spat on him and called him a babykiller when he got off his freedom bird.

We'll have to disagree about PULP FICTION. I find that Tarantino's ecstatic remixing of pop culture dates pretty well, especially because it's almost never about pop culture references that are strictly married to the moment of the film's release but instead about a wild scavenging throughout previous decades, genres and media. Compare what Tarantino does -- for example, the highly stylized Leone-esque repurposing of surf rock on the PULP FICTION soundtrack -- to the neverending deluge of literal, disposable references in FAMILY GUY and even those later SIMPSONS seasons start to look brilliant in contrast.

I see what you mean. I like your distinction between timely and topical.

I enjoyed re-watching "Pulp Fiction", so I don't want to put it down, but I must point out that "better than 'Family Guy'" is a phrase that applies to everything in human history except "Family Guy", so we need a higher standard!