Two thoughts on this movie: 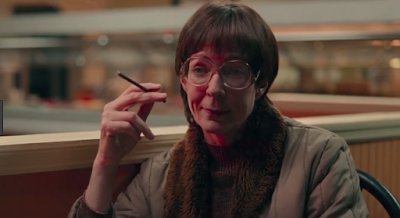 A new tool: The fake-out redemption scene. This movie has a scene in it that’s very similar to a scene in my play, and I think it works well in both places: Like so many stories that seek to redeem a terrible person, this movie features an even-worse parent. I’ve talked about this before with Kind Hearts and Coronets, Downhill Racer, “The Sopranos”, and Trainwreck: Our hero may be bad, but they come by it honestly, and at least they’re better than their terrible parent.

But these scenes can be just as unsatisfying onscreen as they are in real life. We want some human connection between parent and child. We want a breakthrough and maybe some redemption. But you also want to be true to your character, and if your parent is awful enough to justify terrible behavior, then they may be unredeemable. So you can cheat to sneak in such a scene: You can have the parent finally tell the child what they’ve always wanted to hear, and give the kid some emotional catharsis, but only because the parent is manipulating the child.

In the scene in which Tonya Harding’s mom finally tells her what she wants to hear, my first thought was “I don’t really buy this plot turn”, then I realized that Allison Janney was good enough to sell the scene if it were genuine, so if I wasn’t buying it, there was probably a good reason for that. Then I realized, “Hey, this is just like the scene I wrote!” It was a fake-out and I thought it worked well, putting a nice button on their relationship, even if it was fake. 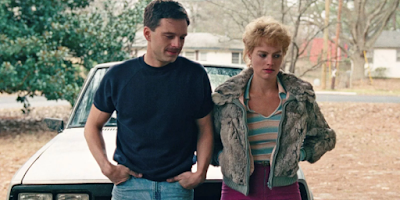 Tricky tone: The big question with this movie is, “Should a movie with this much domestic violence be this fun?” Is it trivializing the violence? Turning it into entertainment? …Worst of all, does it treat this violence as no big deal because the victim is Tonya Harding?

But ultimately, I would say the movie answers all these questions satisfactorily and pulls off its tricky tone, and it all comes down to one moment: That first out-of-nowhere face-punch. Because of the movie’s fun, rock-fueled uptempo tone, I was totally unprepared for the domestic violence to begin, and it hit me in the face as well. I felt the shock, betrayal and fear that comes with that punch all the more because of the tone, and that’s what you want when you tell stories: to make the audience feel the same pain the hero is feeling.

After that punch, the uptempo and humorous tone continues, despite the violence getting worse, but the friction is maintained. The fun tone kept me thinking, “Surely the violence will end. There will be redemption. This will become a love story again.” And of course, that’s just what Tonya is thinking as she goes back to him over and over. The tricky tone keeps us in her head, keeping the violence continually shocking and painful, specifically because it violates the tone. It thought it was a very effective tool.
Posted by Matt Bird at 2:48 PM

Labels: Best of 2017, Best of the Year, How to Manage Expectations, Tone

I loved this movie so much I saw it three times in one week. I laughed out loud throughout it, including the scenes of domestic violence (even the attack scene was played without a shred of sympathy for Kerrigan. Instead, I was "rooting" for the attacker, because the movie placed me in his shoes as he carried out his hit and escape). The character Tonya gave as good as she got, and Jeff was treated sympathetically. The idea presented about people divided into "gardeners or flowers" also added depth, showing the complexity of motives. Jeff seemed wholly unthreatened by Tonya's ability, instead tragically ruining her career in trying to advance it. I loved the ending mixing her boxing knockout with her knockout from the skating and respectable life. A very American story, and a very American tragedy.

I haven't seen I,Tonya yet but the idea of a bad-protagonist worse-parent is surprisingly effective, in something recent like Bojack Horseman, I think this is explored really well.

I really have to watch that show at some point.