It's ridiculous, I realize, to rank a movie like this above serious and powerful movies like The Revenant or Spotlight, but I always try to rank high-brow and low-brow together, according to how strongly I responded, and I responded more to this one, for good or ill. 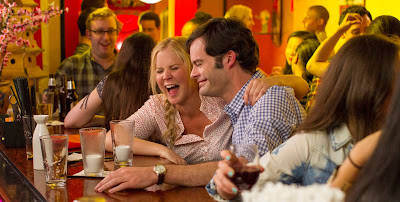 As usual, we’ll talk about rules these movie exemplified, but this first rule is one that never got its own write-up, though it did pop up many times: We’ll accept your heroes’ bad behavior at lot more easily if they had atrocious parents.

As I said in my write-up of Downhill Racer:
Trainwreck is also a great example of this. It’s hard to get us to identify with Amy Schumer’s character: We meet her as an adult with a montage of her contemptuously manipulating and lying to a series of one-night stands, despite the fact that she has a loyal boyfriend. Obviously, this is her flaw, as the title of the film indicates, but it’s hardly a job-interview flaw, and we’re strongly disinclined to care about such characters, not even long enough to root for them to overcome these flaws.

But the wonderful prologue scene takes care of the problem handily (click to enlarge): 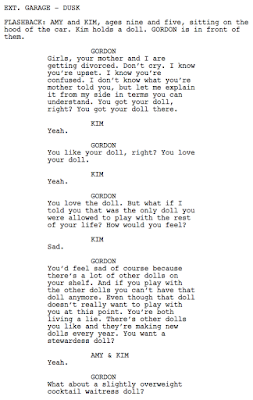 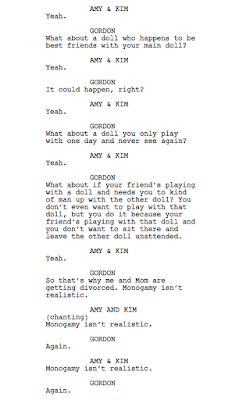 This smash-cuts to the onscreen title “23 years later” and we’re off to the races. Instantly, Amy’s contempt for love becomes a flaw that we can root for her to overcome, because we see that she came by it honestly. She didn’t wake up one day and choose to be like this, she was programmed to be an engine of destruction. It helps as well that her father’s rant is genuinely funny and superficially well-argued: he’s bad but charming, and you can understand why a little girl would fall for his poisonous message (only to heroically overcome it 23 years later, of course.)

Next: A different type of wreck!
Posted by Matt Bird at 4:54 PM