Best of 2015 Runners-Up: Spotlight, and the Power and Peril of Procedure 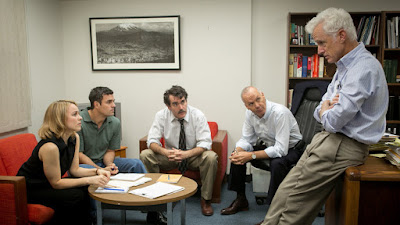 Let me just start out by saying that Spotlight is a gripping, powerful, important film, and one that everyone should see. I love the pacing, the editing, the dialogue, and especially the performance of Mark Ruffalo. Ruffalo’s part, on paper, is a fairly standard crusading journalist hero, without a lot of specific details, but the performance transforms him into a very specific individual, with his own way unique of talking, listening, and moving. That’s the mark of a great actor.

So what’s the problem? I found the movie to be too cool and clinical. This is a movie about an outrage, but we get little outrage generated onscreen, and thus we don’t feel it as much as we could. To a certain extent, that’s the point: it takes the coldly impassive eye of the journalist to find the truth when accusations fly, but I felt alienated.

I kept thinking of a 1995 “Law and Order” episode that covered the same topic from a similarly procedure-based standpoint, but created far more emotional impact (This episode also came out six years before these stories broke, which undercuts the movie’s claim that this investigation was the turning point in public perception)

Ultimately, the movie’s extreme commitment to procedure is both its greatest strength and biggest disadvantage. We get to see things we would usually never see in a movie:
On the one hand, this can be thrilling: This unprecedented workaday realism conveys the powerful sense that these are real people doing a real job in the real world, which means that these were real crimes with real consequences that really had to be exposed. On the other hand, the movie is so subdued that it’s hard not to feel subdued ourselves, and given the incendiary nature of the subject matter, that’s especially frustrating.
Posted by Matt Bird at 8:00 PM