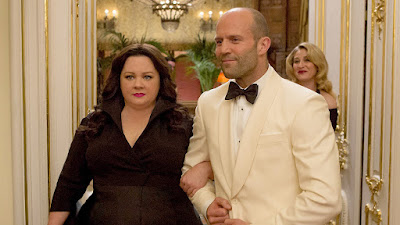 Last time, the most beautifully-made movie of the year missed the list, and today we have the funniest by a wide margin, which got tripped up in my mind by one big script problem.

It feels wrong to nitpick this delightful movie, which made me laugh so hard I cried more than once, not just due to the game slapstick and swagger of Melissa McCarthy, but also the absurdly-acidic villainy of Rose Byrne and the unexpected comedy chops of Jason Statham, mercilessly skewering his own macho persona.

But my big problem with the script was the revelation near the end that Jude Law’s character wasn’t actually dead, but instead faked his death to go deep cover. The Force Awakens actually had a very similar problem: It, too, created a likeable, suave, traditional leading-man hero, then killed him off abruptly so as to hand story over to a non-traditional everyman hero. But both movies, in subsequent drafts, lost their nerve and brought the suave character back at the end, even though that sabotaged the everyman character’s journey, rendering her/him somewhat superfluous once again.

But one big problem with bringing Law back is that it runs afoul of the rule that the hero should be the only one who can solve the problem. It raises the possibility that it might have been better if McCarthy just stayed home, which subconsciously alienates the audience from the movie and the character.  We’re so culturally-conditioned to not root for an action hero that looks and acts like McCarthy that this misstep strains our hard-earned identification.

But this also raises a bigger problem, because by this point in the movie McCarthy has killed / caused-to-be-killed a lot of people, so the second we ask if it was necessary, we might start to hate her. Now we’ve got another broken rule: the moral calculus problem.

I know, I know, who cares? It’s just a big silly comedy, and nothing is supposed to be remotely believable …but I don’t think that this just bugged me. We don’t keep track of the moral calculus ticker in our head, but it’s always there, silently clicking away, and if it ticks into the danger zone, something subconscious sours inside us.

Nevertheless, it’s great.  See it and have a hell of a good time.
Posted by Matt Bird at 8:00 PM