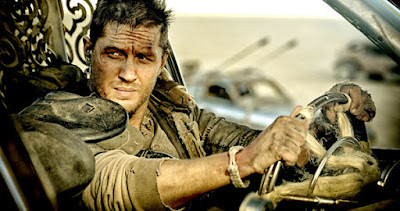 This movie does one of those things I hate, but it gets away with it, so let’s try to figure out why. I’ve complained in the past about movies in which the hero’s motivation is a tragedy from the past that we see in tiny glimpses of flashback. Why? Several reasons:
And yet, in this movie, it works. Why? Most obviously, because it takes advantage of the remake/sequel confusion, working in such a way that it can either be a flashback to the first movie (despite the fact that Tom Hardy looks nothing like Mel Gibson) or a brand-new character introduction. But would it work if this wasn’t a semi-sequel? I think so. Why?
Based on a few quick glances of the past, we instantly get what happened to his family, how he feels about that, and why he would resolve to keeping it from happening to someone else. We buy it.

One more thing about the flashbacks that personally makes me just fine with them from a story standpoint - they don't just pop up as his motivation and then disappear, bit actually have an effect on the outcome.

Every time Max hallucinate his dead daughter he freezes and jolts back as if struck in the face. The first time we see it happen it hurts him and allows him to be captured by the War Boys, but the final time, when he isn't running but fighting for something bigger, that hallucinate-freeze-flinch reaction actually winds up saving his life. I don't know if you'd call it hackneyed or contrived,but that kind of callback always gives me a feeling of closure, of all elements coming back together.