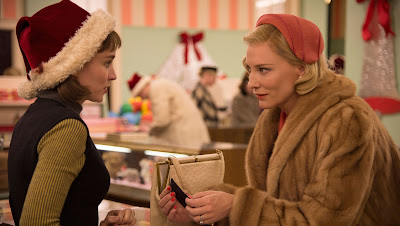 This time let’s talk about some of the things we covered in the Books vs. Movies series.

In some ways, novelists have it much easier than screenwriters, and in some ways they have it much harder. It’s easier because they don’t have to pack everything into the dialogue, they can just tell us what the characters are thinking and feeling. It’s harder, of course, because they don’t get to hand that job over to the director and actors: they have to do all the character work, exterior and interior, themselves. Patricia Highsmith was a very interior-focused writer. Her primary influence was Dostoyevsky, and her characters too, are filled with raging torrents of self-hate and self-doubt under comparatively calm surfaces. Let’s look at how she writes the first scene between Carol and Therese: 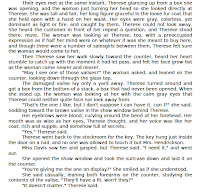 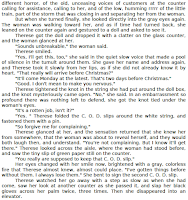 For every word of (intentionally banal) dialogue, there are three words describing the thoughts and feelings that underlie those words. So what does screenwriter Phyllis Nagy do when she has to adapt that dialogue for the screen? Let’s look:

She doesn’t try to put all that subcutaneous emotion onscreen (and she doesn’t try to slip it in using parentheses, thankfully), but she does make the dialogue more compact and a little more sprightly. Most intriguingly, she changes the two purchases, (a doll suitcase and then a doll) into one (a train set). Why change it to a train? Most obviously, because this adds an “I understand you” moment, or at least an “I want to understand you” moment: Carol and Therese can’t express as much through looks, so Carol is forced to actually ask Therese about her life and discover that Therese was the sort of girl who preferred trains to dolls. The novel scene is purely subconscious gay-dar at work, but the train set dialogue brings that slightly out into the open.

Ultimately, Todd Haynes was the perfect choice to adapt this, because he knows how to pack power into meaningful looks better than almost any director out there, but Nagy subtly gives him a little more to work with.

Next: Another great adaptation of an interior novel
Posted by Matt Bird at 8:00 PM