Storyteller’s Rulebook: The Value of the Baby in a Basket in Harry Potter 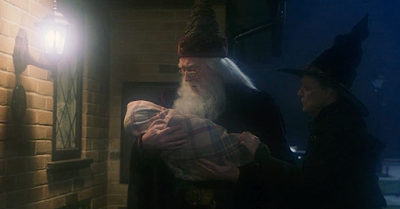 One of the basic story archetypes is the baby in the basket: A baby is destined for a glorious life, but then, usually to save his life, he is taken away from his parents, who often die, and he’s sent to live in more modest circumstances, where he is raised humbly, believing himself to be a commoner. When he gets old enough, he finds out about his glorious legacy and rises to become a hero.

Oedipus is a baby in a basket. So is Achilles. So is Superman. One variation on the theme is Moses, who is sent to less modest circumstances, but even there, he’s separated from the source of his future super-powers until he discovers his birth parents.

And of course Harry Potter is a classic “baby in a basket” hero.

These stories also speak to us because they reflect our universal sense of being misunderstood. We all feel like we are destined for greatness and mistreated by a world that insists on treating us like ordinary people, and we long to read about characters for whom that’s really true. The moment where the hero finds out that he was born to be great is the ultimate wish fulfillment for the reader.

Rowling also taps into another universal feeling, as least for anybody with a sibling. Every sibling feels, at one time or another, that they’re being slighted in favor of another sibling. Rowling takes that universal sense of injustice and magnifies it a thousand-fold, creating deep identification.
Posted by Matt Bird at 8:00 PM

Same with the point about the sibling. It seems that the basic idea behind a lot of your points like this is that "We all have these deluded selfish impulses. Deep inside, we're all shitty narcissists. But through literature, we can indulge these narcissistic fantasies through imaginary wish-fulfillment."

If that's what reading is, how is reading not just another vice? If that's what it takes to be a good storyteller, why would anyone want to be a storyteller -- just taking the audience's worst impulses and repackaging them in a way such that the audience can indulge those impulses without consequence?

Sounds like joyless, ignoble work to me. If that's what I thought being a storyteller really was, I wouldn't want to do it.

By the way, I hung out with Jac Jemc last night (you met her at that literary salon at the Hopleaf, around the time you moved to Chicago) and she says she uses SECRETS OF STORY in the creative writing class she teaches at (I think) Northeastern Illinois University, and that the students respond really positively to it.

The world is a sewer, James. The most fascinating story to come out this week: https://deadspin.com/teen-girl-posed-for-8-years-as-married-man-to-write-abo-1820305588

As for Jac, we're Facebook friends we have a mutual appreciation society because we both liked each other's books (for those that don't know, she wrote an acclaimed haunted house novel called "The Grip of It"). You should have invited me along!

Yeah, which is why you don't see the "baby in a basket" trope in most fiction. It's powerful but it's also pandering.

The feeling that one is unappreciated and mistreated is a human universal. Because it's true -- everyone is. Such is life, yo. What matters is how you deal with that sentiment. What adds to the feeling's power as an element of fiction is that it's a feeling that society, for obvious and very good reasons, does not encourage us to talk about. Stories that address deep feelings within us that we haven't or can't fully grapple with are stories that resonate.

Take a famous modern example: Rocky Balboa. People love him not just because he's an underdog facing terrible odds. It’s not just that everyone dumps on him, though that’s also true. (Everyone gives him grief except Adrian, which is part of why we root for them to get together.) No, we love him because throughout it all, Rocky keeps being a good person. Which is how most everyone understands themselves but we don't want to admit. Everyone feels that they’re hard done by, and everyone feels like they try to be good regardless, and everyone feels like nobody notices. We want to be recognized for our virtue in the face of difficulty, our everyday heroism. We want to be seen as “not just another bum from the neighborhood.” Even if we know it's not true. Maybe especially if we know it's not true.

The genius of Rocky is that this sentiment is indulged but not quite too far. He finds a woman who loves him, he finds self-respect and recognition, and, crucially, he doesn’t Win It All. He lost, which kept the wish fulfillment aspect from choking the story. Yet he still won the fight in the way that we knew mattered to him: he went the distance.

Writing stories that mess with our less noble sentiments can get icky. You have to recognize what you're dealing with. You can no doubt think of three dozen stories that leave you feeling a little dirty by how totally they pandered to the audience's sense of aggrieved entitlement. The deeper, usually unspoken feelings we have are powerful stuff, not to be used without consideration.

Well, you can use them willy-nilly, but the results will probably be kind of disgusting.

I like your take, Harvey. It splits the difference between Matt's perhaps-justified-but-paralyzingly-depressing cynicism, and my instinct that stories should address something higher than our worst instincts. The ROCKY example was perfect.

But nothing could be more uplifting and idealistic than Harry Potter (and I'd argue that Rocky panders to our worst instincts in other ways.) I may describe things in ultracynical ways but that doesn't mean that Rowling was writing from a cynical place (One could argue that writing about a boy using a gender-neutral version of her name was a cynical decision, though.) There's nothing wrong or cynical about gratifying universal feelings of aggrievement. You're making people feel good, as well you should.

I'm not the one who wrote a well-regarded book of advice, so I know this is presumptuous, but I think that if you push yourself to find non-cynical ways to describe these (valid and useful!) insights, you might discover new truths and your advice might be more palatable. For instance, Tolkien's "On Fairy Stories" and C.S. Lewis' "Experiment in Criticism" describe why certain stories work and others don't, and interrogate the different ways people read and what they bring to that reading, but it never feels cynical. I'm not energized to write when I'm coming from a cynical place that looks down on the reader.

And I don't mean to say Rowling was writing from a cynical place. But the way you describe her writing, you make it sound as if she does.

this is such a good article. opening a different perspective to so much about the book or the ideology basically. i really like the amount of effort put into it. keep writing more

Are you curious about the major sites of Kazanosite and Baccarat Site? The most comfortable and safe place to play online casinos is not recommended on any verification site.  온라인카지노

We recommend the Toto Site Safe Park. The nickname "major toto site" is not a name that can be applied anywhere. It reflects the high praise of users for its sincere operation. I'm showing you the true value. 안전놀이터

Comedian 온라인바카라 has admitted that he is living with the new love in his life, whom he started dating after his divorce about five years ago.

The prolific chat show host made the revelation on his YouTube channel on Wednesday.

"There's a restaurant selling 카지노보증사이트 meals that I frequent, but I've stopped going there," he said. "The reason is that my girlfriend is at home with me. She cooks 슬롯게임추천 t for me, so I'm being well fed. The auntie who owns the restaurant treats me like family and I told her I won't be coming here as often as I used to."

The writing you wrote helped me a lot. 메이저토토사이트 I would like a lot of good articles in the future.