Straying from the Party Line: Harry Potter and the First Five Pages Test

Update: This post originally said that Rowling had no agent, which is what I was told by my wife, but my mother-in-law has now corrected me, so I’ve rewritten appropriately. 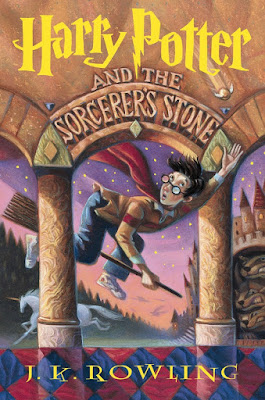 So we all know that J. K. Rowling had a hard time selling Harry Potter.  Her packet with the first few chapters and a synopsis got turned down by twelve publishers before a Bloomsbury editor decided to take a chance on it.

It’s entirely possible that those twelve publishers never even took a look at it before they rejected it, but what if they did? It’s well known that most gatekeepers will only read five pages before they give up on a manuscript that hasn’t grabbed them. So you’ve got to subject your work to the five-page test. How would you feel if you stopped reading there?

If I just read the first five pages of this book, would I buy it? Nope.

This is now one of the most of the most beloved books of all time, so it’s easy to see the greatness in those opening pages. They’re funny. They’re a good entry into this world. But those pages are a big risk, and they could easily have kept the book from ever being published.

Rowling chooses to start with what I would call an anti-POV character: We’re seeing hints of amazing things, but we’re stuck in the head of a buffoonish character who refuses to look at them. Because Rowling is a great writer, she makes this POV very entertaining anyway: We enjoy laughing at his buffoonery and we enjoy peeking over his shoulder to see the things he’s trying not to see.

But if you’re a reader for those first twelve companies, then rejecting this is a no-brainer: We’re reading about an unlikeable character! There’s virtually no dialogue! The title character doesn’t appear! We’ve been promised a fantasy book by the pitch but we’re in a world that’s mostly mundane.

Rowling took a huge risk. She starts us off in an unlikeable head, then introduces our hero as a baby with a huge info dump, then jumps ten years ahead in chapter two, only belatedly letting us get to know our hero then. It’s all well-written, but it’s no surprise that twelve publishers rejected it. The patience of that thirteenth editor was a miracle. He stuck with it and discovered gold.

If Rowling had been more concerned with the rules, this classic novel would have had a very different beginning, for good or ill. Instead, we have this odd beginning that has gone on to enchant so many readers.
Posted by Matt Bird at 8:00 PM

This goes to show how the unquantifiable power of imaginative vision overcomes rules. Only someone blinded by rules and conventional wisdom would think the first chapter is no good. Maybe the reason Harry Potter did so well is because it is confident in its idiosyncrasy, and so the manuscript wasn't second-guessed, workshopped, and checklisted to death. People really want to read something that feels new, something that surprises them. Anything that is truly fresh and vital necessarily feels "wrong" to gatekeepers, almost by definition.

I actually don't care for the opening. I didn't begin reading the series until after I'd seen all the films, which may have influenced my opinion. However I think its more likely that this book is just reinforcing the old adage, prologues are for the birds. (even if they are mislabeled as Chapter 1)

I think your best insight here is about Mr. Dursley as the anti-POV character. Sad to say, lots of people are hostile to fantasy. The only way many people are going to go along with it is if they're cajoled along, or tricked into it, or lulled into it, or made to feel bad if they stop reading.

And this first chapter does it beautifully, by setting up parental figures who hate fantasy and magic and making them look buffoonish (Mr. and Mrs. Dursley) and then contrasting them with parental figures who are very appealing magicians (Dumbledore and McGonagall). Nobody would want to be thought of as a Dursley, and the magic-users are so interesting (and yet human), the choice is clear. In this way, even the anti-fantasy folks can be beguiled into reading further. At the very least, their objections to the fantasy world have been registered by the text itself, and acknowledged, if only to be set aside. The wavering reader asks: "I'll go along with your fantasy, but at least explicitly acknowledge that this is something I wouldn't ordinarily read, ok?" This first chapter obliges.

The Percy Jackson books do something similar, in which the beginning the story is sold as something that's actually true, and you should count yourself lucky that the the doings of the Percy Jackson world don't intersect with your own. Even the "Series of Unfortunate Events" books do this -- they continually say "Don't read on, it's too scary and depressing" which results in the reader saying, "Hey, I'm not easily scared! I can take this! Bring it on, I'm up to the challenge!"

Especially for science fiction and fantasy, it might be that to achieve real mainstream success, you need these first chapters or sequences that carefully, almost ritualistically, remove us from our mundane world and put us in a new context. You'd think that the long buildup in STAR WARS in which you're made to read yellow text floating off into space would be a turnoff, but the music and the (now-ritualized-through-repetition) yellow text floating into the distance puts us in a different head-space. Same thing with ALIEN: we spend a long, long, long time at the beginning not seeing any people at all, just a camera prowling around a seemingly empty ship. And when we do meet the people at last, we spend a lot of time with them as working-class blue collar people before we get to any alien.

On the other hand, DUNE, while successful among sci-fi people, never caught on as big as STAR WARS, perhaps because it just dumps you into the hardcore sci-fi situation with no easing-in.

Isaac Asimov's FOUNDATION short stories weren't really celebrated until they were put in an anthology with a new short piece at the beginning that eases the reader into the world of the Galactic Empire that he'd set up -- a young mathematician from a provincial planet coming to the metropolis planet of Trantor for the first time, just as we the reader are experiencing all this for the first time.

I guess for us sci-fi and fantasy writers, the takeaway here is that the first chapter HAS to be weird like this, in order to guide the reader into the difficult-to-access receptive state, to hold the reader's hand to get them from our mundane world to the fantastical world -- whether by Rowling's mockery, Lemony Snicket's warnings, Star Wars' bombastic exposition, the forced silence of lack of action of "Alien" -- the reader's/viewer's expectations need to be aggressively managed.

I happened to be lucky that my friend couldn't find a date for an event so he generously took me with him, which happened to be one of the best experience for me in recent times. I was lucky enough to see this place. If you get a chance to check this event venue out please do so.

How did you think of this? I think you can help me. Come here to help.토토사이트

I am glad to read this post, it’s an impressive piece. I am always searching for quality posts and articles and this is what I found here, I hope you will be adding more in future. 메이저사이트

Searching for a great site. I was so impressed to yours. This will probably give me ideas for my work. Thank you 경마사이트

I am very grateful that I have crossed your site. Your content was very great that I cant stop reading each post that you have. I hope for the best outcome of your site. Thanks 카지노사이트

I can read all the opinions of others as well as i gained information to each and everyone here on your site. Just keep on going dude. Check over here: 사설토토

I have read your article; it is very informative and helpful for me. I admire the valuable information you offer in your articles. Thanks for posting it. Feel free to visit my website;

This is an excellent post I seen thanks to share it. It is really what I wanted to see hope in future you will continue for sharing such a excellent post. Feel free to visit my website;

Very good written information. It will be valuable to anybody who employees it, as well as yours truly :). Keep up the good work ? for sure i will check out more posts. Feel free to visit my website;
국산야동

Nice to be visiting your blog again. it has been months for me. Well this article that i’ve been waited for so long. I need this article to complete my assignment in the college. and it has same topic with your article. Thanks. great share Feel free to visit my website;
일본야동

It very well may be very unpleasant to make the fundamental groundwork for the large day. There are so numerous things that can turn out badly. You may end up tracking down a couple of wrinkles or pimples preceding the huge day. This is unquestionably something which you would prefer not to see Feel free to visit my website; 일본야동

The info you provided on this site has helped me greatly. Thanks for all of your time & work. 토토사이트

Lots of great information and inspiration both I need, thanks for putting such useful information here. 파워볼

I always think about what is. It seems to be a perfect article that seems to blow away such worries. 안전놀이터 seems to be the best way to show something. When you have time, please write an article about what means!!

When did you start writing articles related to ? To write a post by reinterpreting the 메이저사이트추천 I used to know is amazing. I want to talk more closely about , can you give me a message?