Rulebook Casefile: Cutting Out the Downhill Side of The Martian 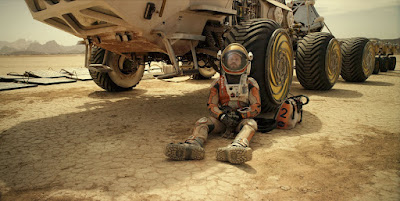 It haunts me still, that baffling dismissal I got from my manager: “At a certain point it all rolls downhill.” I’ve spent years trying to understand it. One big clue comes from comparing the book and movie of The Martian.

The movie is very faithful to the book in the first half (the biggest change is that we get to see the evacuation sooner rather than later), but it has much bigger changes in the second half, which is to say that much of the second half was just lopped off. It almost feels like screenwriter Drew Goddard was simply typing up the book as he went, realized he was running out of pages, and abruptly cut to the climax. For instance, in the book, Watney accidentally shorts out the communication system, leaving him on his own again for months until he can reach the new site, and then his rover flips over on the way.

The change works fine. Once they’re gone we don’t miss those additional incidents, but does that mean that the book didn’t need them either? No, I still like having them in the book, because they return us to the grizzled-loner status of the first hundred pages, and put Watney back in charge of his own story, but in the movie, it would feel like a repeated beat, and a ramping down of the story when it should be ramping up (the flipped over rover, in fact, happens because Watney is literally on a downward ramp!) Books can ramp down, but movies can’t. In movies, you have to keep the pedal to the metal until you go off the end of the cliff.

Or, put another way, we expect our movie heroes to climb Maslow’s hierarchy of needs in only one direction: Watney gets physical survival, then connection with others, then a greater moral dilemma (is it worth having the others return for him on the slim chance he’ll live?). Once we get to the top of the pyramid, we don’t want to descend again, losing communication and then losing safety before finally re-establishing both just in time to take off.

Like Watney, screenwriters must beware when going downhill, lest their rovers flip over. Best not to risk it.

Labels: Best of the Year, How to Structure, Rulebook Casefile, The Martian

Even in the book I found that sequence annoying. I understand the need for one last challenge and danger before the end bit my reaction at that moment inbox the book was "funk! Not again." It felt like the flipped rover did more to fill pages than actually create conflict.