Rulebook Casefile: Foreshadowing Too Much in The Martian 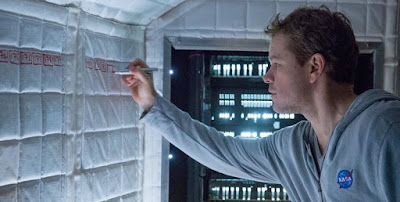 Now let’s look at one aspect of The Martian that was stronger in the book than the movie, and figure out why. I saw the movie first, and one problem I had was with the scene where they decide to skip the safety procedures on the launch of Mark’s food re-supply. Even if you haven’t seen the movie, you probably know what’s going to happen just from reading that: it blows up on the launch pad. And indeed, in the movie, it’s too obvious what will happen, ensuring that the explosion gets more of an eye-roll than a gasp.

Nevertheless, when I read the novel, even though I really knew what was going to happen, that scene didn’t spell its own doom, and the explosion is genuinely heartbreaking. What did novelist Andy Weir accomplish on the page that adapter Drew Goddard couldn’t accomplish on the screen? First let’s look at the book scene: 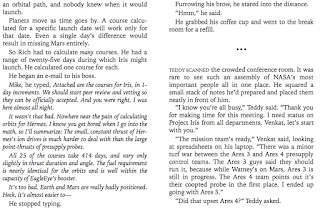 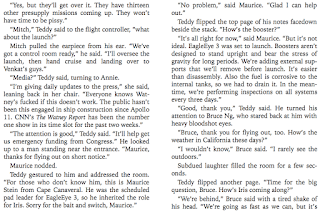 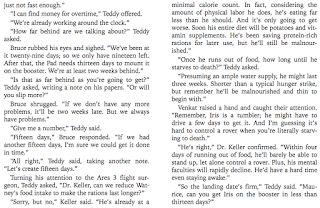 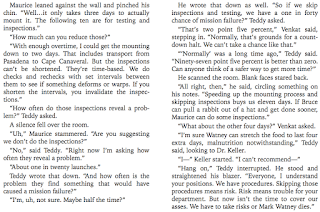 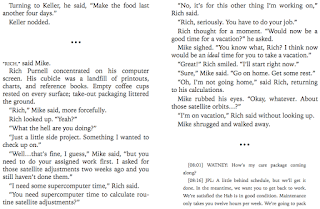 Then let’s look at the movie scene: 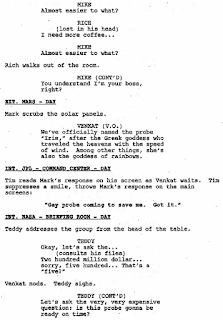 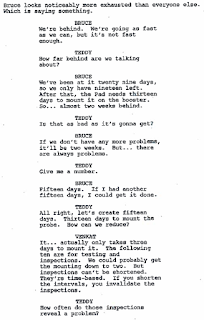 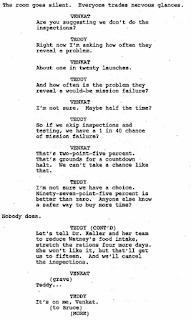 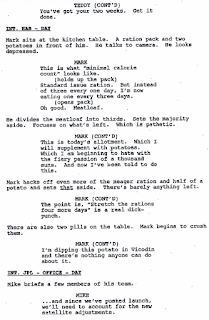 Most obviously, the book scene is much longer, with much more detail, so we get to focus more on the little dramas, without having to step back and consider the larger impact (and inevitable result) of the scene …but it’s more than that. In the book, Teddy feels like the hero of the scene: he’s willing to do anything to save Mark, even get creative with the timeline, and we admire him for it. In the movie, he just seems like a dick who’s heedless of the science.

One problem in the movie is that we don’t really feel Mark’s potential hunger (and therefore the urgency to resupply quickly) as much as we do in the book scene, but an even bigger problem is what Teddy says instead of talking about the hunger. I had to re-read the two scenes a few times to spot the key word: In the script, Teddy begins the scene by asking:
It’s the word “expensive”, which wasn’t in the book scene, that gives the game away. In the book, he’s going to extremes to save a life, which usually pays off in fiction, so it’s shocking when it fails. In the movie, it sounds like he’s risking all to save money, which never works in fiction. The result is a series of scenes that are drastically inert, ending in an anticlimactic accident that generates no sadness.

I think one reason the movie did this was to try to turn Teddy into a little bit of a villain, but it was a bad decision: Adding a villain usually sharpens our emotional connection to the events, but in this case it dulled it. Weir knew what he was doing: Nature (and its close cousin chaos) is the only villain here, and the emotion comes from the pain of trying and failing to overcome it, despite everyone’s best intentions.
Posted by Matt Bird at 8:21 PM

Labels: Best of the Year, Books vs Movies, Rulebook Casefile, The Martian, Tone