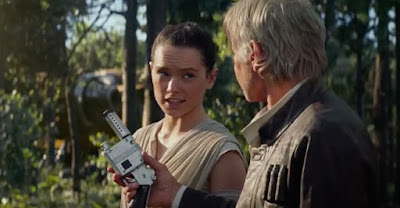 One of the many charges that was leveled against The Force Awakens was that of Mary Sue-ism. Wikipedia defines a “Mary Sue” as “an idealized and seemingly perfect fictional character, a young or low-rank person who saves the day through unrealistic abilities.” The term comes from fan-fiction, where many writer insert versions of themselves into their stories, so as to receive praise from their heroes.

To many people, that seemed like a good description of Rey, the movie’s plucky young heroine, and I agree, to a certain extent.

The movie simply tried too hard to sell the character to us. Not only was she instantly great at everything she tried, from flying the Millennium Falcon to wielding a lightsaber, but, just in case we didn’t notice, each of the other characters gushed about how great she was: Han, Maz, Finn, and Kylo Ren all expressed amazement. Even Chewbacca seemed to instantly switch his allegiance as soon as Han was dead. (Shouldn’t she be his co-pilot?)

Now compare that to The Martian. One thing that’s there in the movie but is even more clear in the book is just how smart the character of Mark Watney is. I would go so far to say that he is, quite possibly, the smartest character in the history of fiction. In order to survive, especially in those periods without contact with Earth, he needs to be not just a genius-level botanist but also show genius in mechanical engineering, astrophysics, physiognomy, and about a dozen other specialities.

In both versions, we follow along with Mark on Mars, but we also cut away to Earth, where NASA is trying to help him and the media is speculating on his odds of survival. In both of those discussions, they never mention the elephant in the room: that everything Mark has done so far shows him to be a 99th-level genius who can pretty much figure anything out.

At a certain point, this gets weird. Isn’t anybody impressed?? What does this guy have to do to make people, “Wow, what the hell, Why are you so smart?”

But the novelist and screenwriter knew what they were doing. We do not want to hear our heroes complimented. We want to find our own place in the story. We want to choose whom to like and dislike based on our evaluation of the actions of the characters. We want characters to earn our trust and admiration, without the writer’s thumb on the scales. We are always highly reluctant to care about heroes because they usually let us down. When a writer praises his or her own character, that sounds like self-praise, that always sounds bad.

This is especially problematic in stories like The Force Awakens, where the character garners praise that seems unearned, but even in stories like The Martian, where it’s downright weird that people aren’t awed by the hero, we appreciate the ability to make our own judgment.
Posted by Matt Bird at 8:00 PM

Labels: Best of the Year, Books vs Movies, Character, Storyteller's Rulebook, The Martian

The comic book character Ms. Marvel, aka Kamala Khan, is the definition itself of a Mary Sue. She virtually has no faults. she's the perfect friend, the perfect sister, the perfect daughter, the perfect superheroine, the perfect not-threatening-girl-next-door distillation of all the characteristics that her author, G. Willow Wilson, wants to associate to herself. It's almost Nietzschean! Stephenie Meyer seems humble by comparison.

I disagree! (To launch into a discussion that no one here will be able to follow) I've only read the first collection, but I would hardly call her the perfect daughter or an un-troubled character! Besides, I would say the worst aspect of a Mary Sue is not excessive competence but excessive praise from others, which she certainly didn't get in that book.

(I know that she's now joined an Avengers group, though, and I could easily see her being used as a Mary Sue there, though I haven't read that book. As I've said before, the problem with single representation is that there's a lot of pressure to idealize the character, for fear that it will look like you're ascribing bad qualities to the entire group. As hard as it is to sell a Muslim super-hero, you really have to introduce two to overcome this problem. Look at DC, who introduced a Muslim-American Green Lantern at around the same time and got in trouble because he was a criminal. In both cases, they need another Muslim hero to balance out the first and allay the implication of "They're all like that.")

I can offer a circumstance where complimenting the hero can work in the story's favor: when the hero starts low, with nobody's faith in him, but progresses through his own tenacity enough to impress the hardasses who put him down in the beginning. In this scenario the compliments aren't in the form of how holy shit amazing the hero is but how much better they've gotten and how they've earned the respect of someone whose respect they crave. The compliment becomes a character moment and a victory rather than just pointless praise.

It can also be good if other characters are shown through subtle ways to believe in the hero, but rather than coming out and saying it, they let the hero figure out for themselves or show through their actions that they are deserving of praise. The example I'm thinking of here is the Captain America movie, where both Dr. Erskine and Peggy Carter believe in Steve Rogers even when he's a tiny weakling. Neither of them tells him he's special, but more than anyone else, they give him the chance to prove it on his own.

Brian, the trick there is that the praise has to be really hard-won, and be half as much as they actually earned.

James, I see what you did there. (I thought you meant it for a second, though, and I got all gooey. I don't get enough praise since J.S. disappeared! Come back, J.S.!)

Jesse, yeah, if you have a hero who is so obviously deficient in some ways, then giving them a vote of confidence is okay. Tellingly, though, Erskine is killed right away, Carter gives him no more compliments once he becomes C.A., and Tommy Lee Jones, the one he really wants to impress, never gives him any more praise than an approving eye roll.

I Would agree. Or else delivered in the form of an action rather than verbal praise. I'm thinking of the scene in the film version of Enders Game in which the sergeant who earlier in the movie did "I will never salute you" and as Ender is leaving the school for the last time stands up and snaps off a sharp salute.