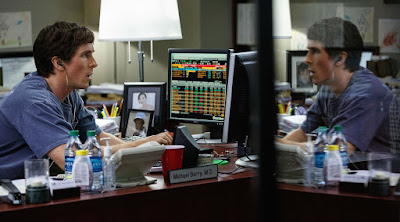 You might recall that, a few years ago, I quoted the book “The Big Short”, so I’m on record as liking that, too, but I will be the first to admit that I thought there was no way in hell it would make a good movie, much less a great one.

Like all Hollywood types, I dismiss such material out of hand: Too obscure, too hard to explain, too many characters, too unsympathetic, no strong central action, etc. I fear that if I had gotten the adaptation job, I would have resorted to the usual tricks: focus on just one story, graft a traditional arc onto that story, gloss over all the financial details, give them a reason they need the money, etc.

But it’s absolutely astounding the degree to which this movie did none of that.

Usually, in a non-fiction adaptation, you keep the character’s names and then give them made-up movie personalities. This movie actually did the opposite: they changed the names of all but one character, out of respect for privacy, but relied exclusively on personality details from the book, even for the re-named characters. Of course, it helps to have a writer as good as Michael Lewis, who habitually goes through and explicates the metaphor family and default argument tactic (“Explain that again. Explain that again.”) for each of his characters. Why make something up if you have that kind of never-seen-before gold?

McKay and co-writer Charles Randolph do none of the things I would have done: they keep almost all the characters, even though they’re on separate tracks and don’t meet. They mimic Lewis’s tactic of alternating illuminating character moments with straight-up direct-address descriptions of financial instruments. They don’t attempt to justify the character’s greed or pretty it up.

They do resort to some tricks, but each time they do, they actually stop the movie dead to point out that they’re tricking us! They blatantly bring in attractive celebrities to explain some financial details. They add connecting tissue and then stop to tell us that they just made that scene up. (They do that often enough that they then have to stop the movie even more to stress that the most outrageous scenes aren’t made up)

In short, this movie did the one thing that conventional wisdom says you shouldn’t do: they trusted the book, and delivered its abundant appeal intact.

But wait, it’s even more extreme, because I would argue that the movie actually jettisons one of the most movie-friendly emotional throughlines from the book, and I’m genuinely baffled by that.

In both the book and movie, investor Michael Burry has a glass eye and blames his social awkwardness on that. However, in the book, just at the point where everybody thinks he’s crazy for making this big trade, his son gets diagnosed with asperger’s, and Bury belatedly realizes that he has it, too, quite acutely. Suddenly, he realizes that, uh oh, maybe there is something wrong with my self-perception, maybe I can’t trust myself on this trade. Ultimately, however, he accepts his diagnosis and himself and sticks to his guns on the trade, with a big pay-off.

Why oh why was this cut? I can’t rightly say. The best I can come up with is that they got Christian Bale to play the part, and so they couldn’t have this be a big reveal, because when Christian Bale plays an aspie, you know right away, and indeed it is immediately obvious in the movie. So that’s why they cut it? I don’t know. Any thoughts?

Next: A look at the character intros
Posted by Matt Bird at 12:00 PM

Labels: Best of the Year, Books vs Movies, Concept

My guess is that a focus on one character and his big doubts would hurt the engine of the movie. Not just because it's an ensemble piece and the storyline would suddenly make the one guy the focus of the story, but because the guy's Big Gamble is not what the movie's about.

The movie is an exploration of National Pain and a heist. The National Pain part is obvious, but the NP in question is one that even eight years later is still fairly mysterious for most of us. You can find explanations if you really look around, but to the general public, it's never been addressed much, beyond some bumper-sticker sloganeering. Many are probably very curious about the sources of the financial collapse that's hosed us all for almost a decade. And it's too serious an issue to distract with some malarkey about a guy discovering truths about himself. The financial collapse has not been sufficiently processed or its aftermath calmed down enough for us to be comfortable with it the background to some dude's story. It's still too much of a mystery.

Most National Pains are obvious: war, natural disaster, that sort of thing. We understand them instinctively. The financial collapse is an amorphous, powerful, Big Nasty Thing, and we want to get our hands around it. We want mastery, we want explanations, we want to know who did this. Explaining the source of the National Pain is the story.

And of course it's also a heist. The guys who set up the credit default swaps were, in essence, running a con or a heist, and they were ripping off the guys who created the mess in the first place. (Yes, it's more complicated than that, but on a gut story level, I'd say this is accurate enough.) We get to see the daring group of outsiders take advantage of those who have taken advantage of the world, making off with vast fortunes.

To shift the story to one particular trader and his personal issues would feel inappropriate. "Sure, the banking industry's rampant conflicts of interest and blindness led to a complex chain of events that sunk the economy, but what's really important is this pne guy's realization about himself..." Maybe in twenty years, when the financial collapse is history rather than present, that could happen. But right now, you can't do that without coming across as tone-deaf.

Yeah, I guess it didn't fit the overall tone. It was brilliant to turn it into a sort-of heist movie, which I'll discuss today.