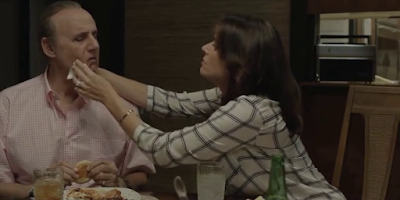 Let’s follow up on Thursday’s piece, where I transcribed the long central scene of the “Transparent” pilot. As I said then, this scene throws the beatsheet out the window. The stated purpose of the scene is for Maura to tell her kids the truth, but instead they talk about everything but and never get to the point. This happens because the kids aren’t listening, and instead push their own small-minded objectives.

To a certain extent, this should be true of every scene you write: Let the listener rewrite the scene. Let them be just as aggressive as the talker. Let the scene become about what they want to hear, even more so than what the talker wants to say.

Writing cannot exactly resemble real talk (it should be more succinct, more focused, and have more personality) but it is always great to reflect the structure and nature of real conversations, even though you must do so in a punchier way. In real life, people listen poorly, and all scene partners always have their own agendas, whether they know it or not. Frequently, we have a conscious, intentional agenda and a subconscious, unintentional agenda, and great scenes can reveal both. Reread the scene to track all eight agendas at play:
With those eight agendas at play, it is any wonder that nobody ever hears that Maura has come to say?

When actors get scripts, they’re taught to go through each one of their lines and write the mercenary intention of that line out to the side of it, so why aren’t writers encouraged to do the same thing?  Even if we’re not allowed to pre-fill-in those margin-notes ourselves, we should be able to guess what each intention each actor will identify.

(To be fair, allowing a scene to go this deliriously off the rails is a luxury of a more leisurely show, reflecting the facts that it has no commercials, runs a full half-hour, and benefits from the new reality of streaming, where you don’t need enough story progress to tide an audience over for a whole week. But no matter what the format, any scene written this well will hopefully be allowed to set its own rules.)

This trick can also be used to make scenes more momentous instead of less momentous: Your beatsheet might say “Lori confronts her father about his embezzling”, but that doesn't mean that you have to begin with Lori going to confront her father.  Instead, start the scene as “Dad proposes an expansion of the business to Lori”, and then as she resists, let her rewrite the scene to be about what it’s really going to be about.
Posted by Matt Bird at 8:00 PM