Rulebook Casefile: Showing Off a Spectrum of Moods in the “Transparent” Pilot 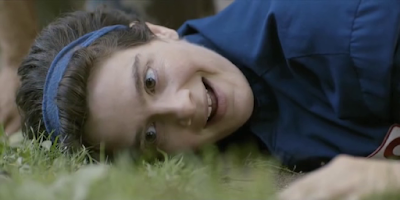 This is an old checklist item that’s never gotten its own post, so let’s fix that right here and now, shall we? One nice thing about ensemble TV is that you get to have different moods in different storylines, and assure a range of audiences that they’ll all be satisfied by every episode.

The whole goal of a pilot is to get the audience to tune back in next week (or let the next episode autoplay if it’s streaming) This is one reason that your pilot can’t be all heavy-lifting to get the pieces in place. You have to present the appeal of the show, and ideally you’ll be showing off different types of appeal.

Not all shows have a spectrum of moods, but it’s very common even for very serious or very comedic shows. It’s easy to forget how funny “The Sopranos” could be. The interesting decision they made in that pilot was to play one storyline for laughs that was actually deadly serious (an HMO exec is beaten and then threatened with death until he agrees to submit phony claims) and another more absurd storyline is played for pathos (Tony decides to burn down his friend’s restaurant rather than let a hit go down there) David Chase has a genius for finding humor in the oddest places, and he made an unexpected but clever choice: both storylines work wonderfully, and we feel reassured that this show will slake our desire for both tragedy and comedy.

“Transparent” is naturally set up for multiple storylines: Each episode, Tambor will carry the main storyline, and then we’ll have our three grown kids, each doing their own thing, and only occasionally interacting. Their actions will frequently be thematically linked (In episode one, they all instigate relationships. In episode 4, they all blow up their lives, etc.) but only overlap in a few scenes.

Once again, these storylines tend to cover a spectrum of moods. For the pilot, Soloway does the natural thing and plays to the strengths of each actor
But this is no “Seinfeld”: characterization will become deeper and richer for all characters very quickly, and they will get to trade off these qualities as well from time to time. Hoffman, especially, will get some heartbreaking moments.

This is a show that’s in danger of being too preachy or earnest. I could have felt like getting lectured at, or told to eat our vegetables. Instead, it’s almost giddy with love of life. We let it autoplay because we like all four leads, and because it’s pleasant to watch. “The New Yorker” profile begins by quoting one of the best exchanges of the show, from episode 6, and it encapsulates the show’s ability to puncture any fears of activist proselytizing: 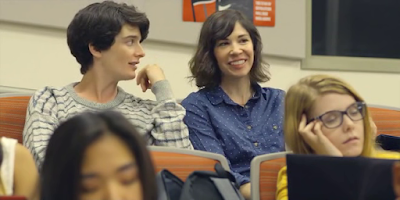 Okay, the reader thinks with a sigh of relief: This show isn’t out to get me. There’s room for me here, wherever I’m coming at this from.
Posted by Matt Bird at 8:00 PM