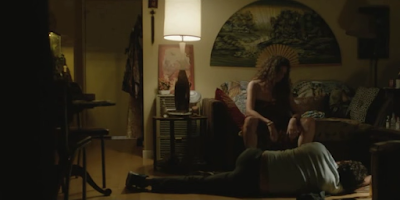 “Transparent” creator Jill Soloway has given several excellent interviews about the show. I recommend this in-depth “New Yorker” profile, and this much shorter list of advice she gave her writers’ room. One piece of advice is excellent by itself, but also points to one of the few failings of the pilot:
This plays out well in the pilot in many ways. Although the characters get frequent chances to talk at length, they remain pleasantly enigmatic, as they use language to camouflage their thoughts and actions, rather than demonstrate or explain them. One advantage this is that we learn to watch closely and eagerly, because we quickly learn that only by watching their actions will we find out the truth behind their lying words.

But in re-watching the pilot for this write-up, I discovered two scenes that I had totally missed/misinterpreted on my first viewing. In both cases, characters were lying about their actions, but I didn’t catch that, because I was still too busy trying to get a handle on this large ensemble, and depending on the characters’ words to help me along.

After the dinner, when he finds out he may be losing his home, Josh goes not to his house, nor to the home of the young singer he’s sleeping with, but to the home of a mysterious woman we’ve never seen before. They seem to be lovers, but he shrinks down and lays his head in her lap. The next morning, he joins the singer and she wonders why he didn’t come over the night before.

Here’s my problem: That brief scene was intercut with scenes of the other kids and I must have blinked and missed it. We find out in later episodes that this was his former-babysitter/statuatory-rapist (which his parents semi-condoned), who he still seeks out occasionally for solace, but the scene was just too subtle to register with me. (It’s wordless and shot in one take from a distance, so we can’t make out the woman’s dimly-lit face. Another thing to keep in mind on streaming shows: many people will be watching shrunk-down versions) When he lied to his lover the next morning, I forgot this enigmatic scene and believed his lies. 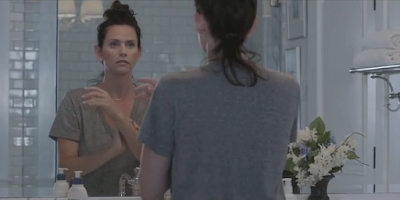 Right afterwards, Sarah tells her husband that her dad called them together the night before to announce his retirement, and her husband accepts this. In retrospect, she avoided mentioning the house because she was already planning to use that house to host an affair with her ex-girlfriend, but once again, I just believed her. After all, we didn’t see the whole conversation the night before, and selling a house and retiring often go together.

This is another peril of the new streaming world: Networks are infamous for re-shooting pilots until it’s totally clear who everybody is, even for casual watchers washing dishes. Soloway has much more freedom, both in writing and directing, and she pushes it too far at times, losing even a close-watcher such as myself.

The show doesn’t suffer as a result, but it’s a good cautionary tale nonetheless: It’s great to let your characters lie, but give us enough visual information to figure it out. For instance, if they’re going to lie about something they just did or something they’re just about to do, then don’t cut to someone else in between those scenes: Bang the lie up against the true action, so we can go “Ah!” instead of “Huh?”
Posted by Matt Bird at 12:00 PM