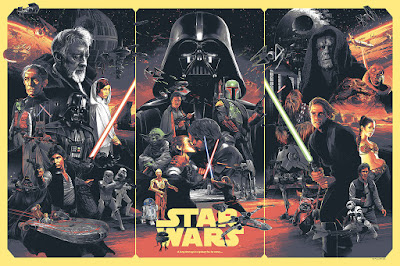 Hi guys, I’m glad my posts this week on The Force Awakens were so popular. Just so you know, I’ve written a lot about the series and what it can tell you about writing, so feel free to sample any or all of the below. (As for next week, I’m tempted to rush into my year-end list to keep the current-movie discussion going, but it’s not ready, so I’ll spend two weeks dissecting a recent pilot instead – I hope people stick around anyway!)

How Star Wars Proves That Legacies are Better than Prophesies

The Value of the Half-Fact in Star Wars

The Way the Worlds Work in Star Wars

The Value of Shaggy Dog Storytelling in Star Wars

James Kennedy wrote an in-depth letter (1, 2, 3) about why we like Luke, and I responded

How Return of the Jedi Dared to Confront the Great Hypocrisy

How Star Wars Set Its Tone and Rewrote Our Genre Expectations

The Way That No World Works in the Prequels

Matt, by giving me a platform, you've created a monster. The blog is going to make me famous! PEOPLE: If you liked my unorthodox opinions about Luke Skywalker, wait'll you hear my theory about how Mulholland Drive and Upstream Color are palindromes of each other! It's a mind-blower!