The Force Awakens Was Great Until It Wasn’t, Finale: The Remake Problem 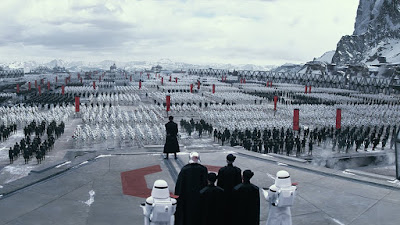 My final complaint about the movie is one that’s already been widely aired, but it’s worth laying out again. Like Abrams’s previous movie, Star Trek Into Darkness, it can’t decide whether it wants to be a remake or a sequel. Let’s look at all the many, many ways that it plays like a remake:
But does that have to be bad? After all, I love the James Bond movies, and they’re nothing if not derivative of each other. As with everything else I’ve covered this week, it’s starts out okay and then gets depressingly problematic over the course of the movie, inducing a collective eye-roll by the time we get to the “plan the big attack” sequence.

But the real problem is that the movie only makes sense as a sequel. Goldeneye may be derivative of the best Bond movies, but it doesn’t create emotion by bringing back Pussy Galore and killing her off. This movie, on the other hand, is all about cashing in on old value. This is most obvious in the killing of Han Solo, but an even bigger issue is the movie’s driving force: the search for Luke Skywalker. Why? Why is anybody besides Leia searching for him? Do they need him to help the resistance? Does he have key information they need? Why would Rey or Finn care about finding him?

The only reason that anybody cares about Luke, on-screen or off, is because of our affection for the original trilogy: this movie gives us no reason to like him or want him to join the cause.

If the movie wanted to do an ultra-faithful Bond-style pastiche, then it had a responsibility to create its own story value, instead of coasting on the pre-created value. On the other hand, if it’s going play like a sequel, it’s got a responsibility to give us a fresh story.

The biggest problem with the remake issue is it required them to instantly flush away the happy ending of the original trilogy. Somehow the politics have instantly rebooted back to the original set-up: Scrappy rebellion vs. huge fascist army. How hard would it have been to simply make the “First Order” into an Al-Qaeda like group? Shouldn’t they call themselves the resistance/rebels, and denounce the ruling Republic as a new empire in disguise?

That would have been an interesting chance to flip and critique the politics of the original trilogy, but instead we just get a reset button, because a virtually-scene-for-scene remake wouldn’t make sense under those new parameters. It’s a slap in the face to the original trilogy and the epic journey that we took with those characters.

Oh well. It’s a fun movie to watch, and I can’t begrudge it its huge success, but it certainly has massive problems. Will I get sucked into watching the next one? I guess. But will I enjoy the inevitable fan fatigue and critical backlash if they stick to their plan of making a new movie or spin-off each and every year into perpetuity? Boy oh boy yes.
Posted by Matt Bird at 8:00 PM

I spent at least 3/4 of the movie trying to figure out who the heck was in charge of running the galaxy, yeah. And that's speaking as someone who liked it. ;)

I'd take marks off for content certainly, but for me it's full marks for presentation. I think the original trilogy has definitely been cut too much slack and that their quality is now set in stone, especially in the wake of the prequels. And really they seem like films made by gods compared to Phantom Menace. For me The Force Awakens was miles better than Return of the Jedi which really suffered from simply the emotion and drama being stripped away. Intercutting between the Luke, Vader, Emperor confrontation are scenes of the Ewoks gleefully taking down stormtroopers and At-At's as if it was something out of Tom and Jerry. With this one, it knew exactly which beats to play at which moments, the humour never took away from the drama, nor vice versa. This is what all the other six couldn't achieve, be it C-3PO bumbling around trying to switch off a trash compactor, or Chewie trying to piece back C-3PO (again) as their making their escape from Bespin.