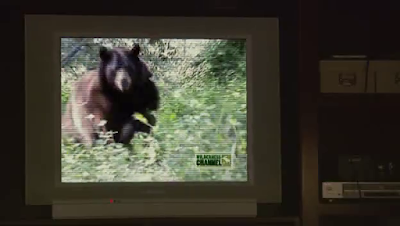 The title of the “Weeds” pilot isn’t “A Perfect Little Town”, or “Dealer’s Choice” or “Let’s Misbehave”, which are the sorts of titles you might expect.

Yes, the concept of the show is that a soccer mom is dealing pot, but Kohan  knows that her premise isn’t really that edgy or shocking, and so she resists the impulse to just let the pilot be, “Oh my god, guys, a mom is selling pot! Aren’t you shocked??” Instead, she’s going to tell us a complex emotional story to which the pot is only tangential. Not only is this a center-cut pilot in terms of not showing the origin of its premise, it’s also center-cut in the sense that it already has more nuanced things to think about.

So what is the title? “You Can’t Miss the Bear.” What does that mean? Well, lots of things. Nancy’s sons, especially the younger one Shane, are obsessed with a cable bear-hunting show in which the hosts inevitably end up missing and running away, screaming that phrase. This pays off at the end when Shane leaps down from a tree and assaults his bullies with some strange liquid in a squirt-rifle, chanting that phrase.

But there’s also a bear in Silas’s storyline. He and Celia’s daughter Quinn want to have sex in Nancy’s house, because Celia is trying to spy on them with a nanny-cam inside a stuffed bear. In the end, Celia checks the bear’s video only to find that Quinn has used it to show her her husband having sex with a tennis instructor.

And then, of course, there’s the notion of a protective bear mama and her cubs. And the fact that bears are the wild animals that most commonly roam into suburban back yards. And there’s our looming fear that, some day, as with any illegal cash business, someone will probably come after Nancy with a gun.

Strong metaphors are never exactly one-to-one. They roll and flow. It’s important to control this, so that they don’t totally flip around to accidentally reverse the original point, but it’s equally important that they remain complex, and never a simple A=X equation.

So whats the unifying thread here? Why is Kohan using all this bear imagery, and why does she pointedly call attention to it in the title?  What is she trying to say?  Well, a lot, and a little.  She’s letting us know, first and foremost, that this will be a show about what things mean to the characters, rather than what things happen to the characters.  And she’s also letting us know that she’ll try to keep her thumb off the scales.  She’d rather give us questions than answers.  That’s what makes this a cable sitcom, rather than network.
Posted by Matt Bird at 12:00 PM