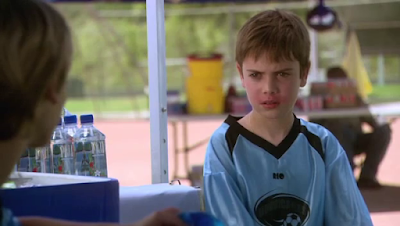 What is empathy? What are its uses? Can it ever lead one astray? In light of the recent headlines, these have become pressing questions.

If there’s one thing I hate in stories that include kids, it’s the inevitable “bully scene”, featuring random sadism that comes out of nowhere. When we write about kids, it’s good to remember how things felt when we were kids, and recreate those feelings, but it’s also essential to look back on what happened with our wise adult eyes, and paint a more perceptive portrait than we would have painted then.

As a child, when you get bullied, it always feels as if some sadist has randomly selected you to abuse for no reason whatsoever. And to a certain extent, that’s correct: There is no good reason to bully a child, but there usually is a bad reason. So this begs the question: should we bother to find out what that bad reason is? There are lots of reasons to say no:
So rejecting empathy may sometimes be for the best if you’re the victim, or perhaps even the person in charge, or just an angry witness. But it’s not good enough if you’re a writer. A writer must know and show the bad reason. Evil characters do not need your sympathy, but you must show their logic.

The “Weeds” pilot shows a very believable bullying situation. Ten year old Shane’s father died of a heart attack while they were jogging together, but he’s adjusting okay, although his behavior is slightly odd. In the scene in question, he’s idly dawdling on a soccer field, only to get inadvertently trampled by his own teammates as they scramble for the ball. On the ground, he sees that he’s bleeding, and he licks the blood off his knee, causing his teammates to scream in disgust.

Soon he’s happy to be back on the sidelines, drinking fruit-punch which has stained his whole upper lip, when the star player / coach’s son is told he must sit out for a while and ice his knee. Shane offers advice on icing the knee, but the player responds with a barrage of ridicule and insulting nicknames: about Shane’s fruit-juice covered face, about licking the blood, and about sitting out when the team needs him. Shane rolls his eyes and responds with sarcasm. Frustrated at his failure to get a reaction, the player escalates to “orphan boy”.  Shane throws a bottle at the player, who then chases him looking to beat him up.

To Shane, of course, this feels totally random and sadistic, but although it is unjustifiable, it’s far from random. Kohan expertly constructs a complex chain of events that culminates in the bullying. There’s no good reason, but there are bad reasons: Shane’s odd behavior, his sarcasm, and the fact that he’s a detriment to the team but doesn’t care (After all, the bully probably feels that he must lead the team to victory to please his dad).

And yes, Shane does indeed need to examine and fix his triggering behavior, even if the response to those triggers is extreme, irrational, and sadistic. 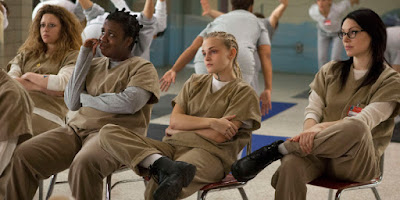 Jenji Kohan is an expert on the subject of human nature. Her later (and greater) show “Orange is the New Black” will take this to the next step: The offenses on the outside are real, and must be wrestled with, even while acknowledging that the punishment on the inside is cruel, unusual, and not helping anyone. You must acknowledge that you triggered this sadistic treatment, without ever coming to feel that you deserve the sadism. It’s a tricky line to walk.
Posted by Matt Bird at 8:00 PM