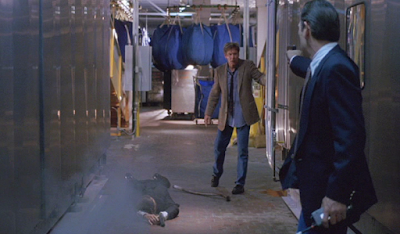 I’ve said before that audiences expect a genre movie to meet most of the pre-established genre expectations, but defy a few of them. The Fugitive is a classically structured, adrenaline-packed thriller that delivers almost all of the conventions that audience expects, but there’s one nearly-universal aspect of this genre that it pointedly refuses to deliver: the hero doesn’t kill either of the villains (neither hitman nor client.)

But rather than leaving audiences disappointed, this was a huge aspect of the film’s success:
In most “law vs. justice” thrillers, the hero humiliates the pansy-lawmen once and for all by doing what they refuse to do: deliver swift-and-fatal “justice” himself. This is supposed to make the audience stand-up-and-cheer in righteous wish-fulfillment. But this movie is doing something entirely different. This is a “law vs. justice” movie, but the solution is not to sever the two permanently, but rather to bend them back towards each other. For the first two reasons above, Ford has no interest in killing the two men who killed his wife, but it also ties in nicely to his flaw-as-flip-side-strength.

As we discussed last time, it should be frustrating to us that Kimble frequently sabotages his quest, but this turns out to be exactly the right thing to do: If he’s not going to kill the villains, then what can he do with them? Make a citizen’s arrest? No, he has to win the lawmen back to his side, and ironically, he can only do so by sabotaging his cause over and over again in the name of compassion.

Every time Kimble sabotages his cause, he’s bringing about the only truly-satisfactory outcome: winning Gerard over, and reuniting law and justice. We’ll talk more about that thematic dilemma next time…
Posted by Matt Bird at 12:00 PM