Straying From the Party Line: The Not-Quite-Everyman Hero of The Fugitive 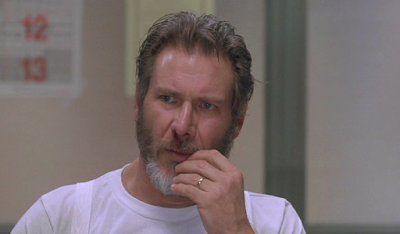 When I first gave my rules about not allowing your hero to be an everyman, I cited The Fugitive as an example of how to do it right, and Richard Kimble does indeed avoid that dreaded label…but just barely. At the time, I focused on Kimble most unique aspect: his special skills.

As director Andrew Davis says in the commentary, “The idea of Richard Kimble the doctor using hospitals to take care of his wounds, find the one-armed man, his intelligence is all tied into his being a doctor and knowing how to operate, literally operate, in a hospital.” In weaker thrillers, the falsely-accused schmuck simply transforms into a superhero as soon he goes on the run, but in this movie, the hero solves his problems in a way that is unique to his character.

But we should also acknowledge that there are many aspects of Kimble’s character that do make him seem generic and/or unengaging, and clearly violate our rules:
And yet, Kimble is a wonderful hero. Why? Most obviously, it’s because of his specificity, such as with the doctor skills, metaphor family, argument tactics, etc. but there are other reasons as well: 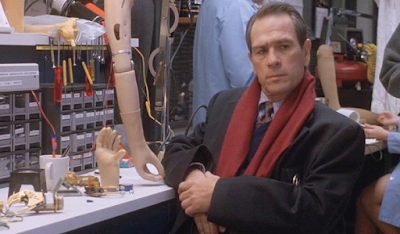 We fully engage with and sympathize with Kimble, but, thankfully, we don’t have to fully identify with him, which would be hard to do for all of the problems listed above. We would too frustrated by Kimble’s passivity and lack of curiousity if we didn’t have Gerard, who serves as both antagonist and co-hero and has all of the likable qualities that Kimble lacks: he’s active, volatile, hyper-competent, verbally-incisive, and very curious (he lies when he says he’s not trying to solve a puzzle. It’s more accurate to say that he’s trying not to solve a puzzle, but he can’t resist.)

The next big factor is, of course, Ford. As with Matt Damon in The Bourne Identity, Ford’s performance obviates the need for many of the traditional likability tricks simple because he’s so effortlessly compelling. The producers submitted this script to Ford three times over five years, and he turned it down each time, so they simply kept rewriting it until they could win him over. They knew they needed his qualities.

A third factor is that Kimble’s tendency to sabotage his own cause turns out to be his secret weapon. We’ll get to that next time…
Posted by Matt Bird at 5:36 PM

It's been years since I've seen this one, and my endearing memories of it are from when I was a teenager, so take this with a grain of salt . . .

I always thought that we were supposed to see Kimble as being, not exactly bad, but certainly complacent at the beginning of the movie, and his lack of curiosity and sympathetic characteristics are part of this. Then, as the movie progresses, we see him forced to become more and more sort of "fully human".

Is that way off base? Should I go home and watch the movie again?

Nope, I agree. His flaw is that he's naive, secure in his privilege (as we would say today), and aloof from the unseemly aspects of his job. He got the highest paid non-businessman job, married a wealthy woman, got a luxury apartment, security system, and gun. But as he says, he fears that he just looks like a waiter in his tux: he fears that it's all fake and people will see that his status is false. That greatest fear comes true in an extreme manner. Throughout the film, things are literally being stripped from him: he adopts phony outfits such as an ambulance driver's jacket, then has to strip them off in a panic. Gerard finds his phony hospital ID and rips his picture off to reveal the poor hispanic man underneath.

But everything you're saying is conveyed in a very subconscious manner. I had to examine and then re-examine the movie to spot it. Ultimately, they didn't need to say it, because it was all on Ford's face.

(This was all much more clear in the TV show, which is excellent and well-worth seeking out. The whole point of the TV show was the humbling of this doctor as he traveled the country living with the lowliest Americans, afraid of being discovered. The show was 10% chase, and 90% parable about class, while the movie is 90% chase and 10% parable about class. They're both great.)