Rulebook Casefile: The Impartial Thematic Dilemma in The Fugitive 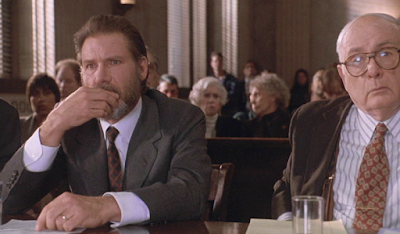 Let’s add another genre convention that The Fugitive refuses to deliver: the false conviction isn’t calculated to make our blood boil. Sure, the stony CPD detectives that arrest Kimble are not exactly sympathetic, but we’re well-aware that, in the same situation, we probably would have reached the same conclusion: Kimble looks really guilty:
The police neither frame him nor act out of lazy apathy: We can’t blame them, or the judge, or either attorney, or the jury. It’s a very reasonable conclusion. This unusual choice helps the movie in two ways:
By adding no ill will to the false conviction, the story refuses to put a thumb on scales: this isn’t bad-law vs. good-justice, which is an easy call: this is a pure good-vs.-good dilemma. The law is implemented flawlessly and benignly, but the result is totally unjust, which makes it so much more painful and compelling.

In the end, as the checklist recommends, the dilemma is resolved in a way that tips to one side but not decisively: Justice is better than law, but we cannot choose one over the other: they must be reunited for either to be worthwhile.
Posted by Matt Bird at 8:00 PM

Yeah, if the conviction of Kimble were more outrageous, it would shift the focus of the movie. The Fugitive is not a story of "the Justice System Done Me Wrong," it's "the cruel winds of fate have forced me to prove my innocence." If the case against him were a travesty of justice, the story would be about righting the wrong of the legal system rather than finding the truth.

As you point out, Kimble's story is affecting in no small part because it's not a revenge tale, unlike almost every thriller. His story is of a man upended by fate and his attempt to put things right. He's a sucker crushed by external forces he didn't even see until they had reduced him to a slurry. Not only can we relate to that -- who among us is not under pressure by external forces controlled by people we can't even name -- it's a more common problem for humanity than "some vile bastard wants to cut out my giblets and stuff them in a mason jar."

Also, the sheer ridiculousness of the extra stuff that condemned him beyond what could have been planned for (the skin under her nails, the 911 tape) add to the sense of cosmic injustice. His enemies are more than a few venal men; the world itself is out for him. For him to resist and triumph is to overcome not just Those Jerks but the cruelty of the world itself.

Damn, I love that movie.