Rulebook Casefile: Art vs. Entertainment in the “Scandal” Pilot 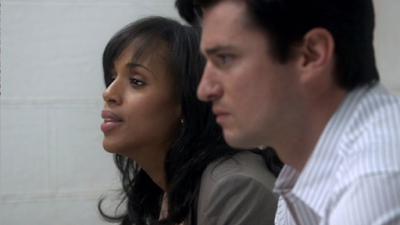 One of the reasons that Shonda Rhimes’s shows are underrated by the high-brow-set is because their moral ambiguity and deeply complex characters sit uncomfortably beside melodramatic plotting and a wildly pulpy tone. Rhimes has mixed a very delicate cocktail of darkness and fizziness: Some admire the audacity of that, while others are (perhaps understandably) offended that she would whip those two together.

I’ve said before that the real difference between art and entertainment is that the latter is concerned with intended consequences (think “CSI” and “House”) and the former with unintended (and ironic) consequences (think “Mad Men” and “Breaking Bad”). So which is “Scandal”? As usual, Rhimes is determined to be both.

The storylines in the pilot have deeply ironic relationships to each other. In one, she has to convince a conservative hero to come out as gay to confirm his alibi at the time of a murder. In the other, she threatens the president’s mistress with humiliation if she comes forward.

If these two storylines were simply juxtaposed, it would feel darker and more ironic, making it more of an arty show, but the show is lifted back up into the realm of entertainment because one finale triggers the other: It’s only after confronting the president that she’s able to tell the war hero what he needs to hear.

So Olivia has restored a chain of intended consequences (she resolves the case-of-the-week thanks to what she learned from the ongoing story), but she does so using a deeply ironic “inspirational” speech that’s actually borne of her own self-loathing and chaotic downward spiral. Olivia tries to harness the irony of her life in order to keep control, but it’s obvious that she’s not really succeeding.

In other words, it’s a volatile mix of art and entertainment, and that friction actually deepens the show. In other hands, this would be an unstable template for an ongoing series, but it’s right where Rhimes wants to be.
Posted by Matt Bird at 8:00 PM

You've described your intended vs unintended consequences theory enough that I think I understand it. But practically speaking, what is the story-creation process that leads to each? What dramatic questions lead you down each path?

In both types of stories, the hero is usually trying to solve a large problem, but in "entertainment", the end of the story is the completion of that problem solving process (This is true even if that process is ultimately unsuccessful. At the end of the CSI pilot, Grissom fails to find the killer, but it's still an "intended consequence" story, because he's still "on task", even if he fails in that task. He knew going in that he might not succeed.)

By contrast in an "unintended consequence" story, the hero's original goal is often forgotten by the end as events have long spiraled out of control.

I believe that in the past I've contrasted "The Apartment" with "The Help". "The Apartment" is a comedy with a happy ending, but it feels more like art because it's about a chain or ironic reversals that none of the characters could have imagined at the beginning. "The Help" is a drama with a fairly unhappy ending, but it's feels more like "entertainment" (and that's fine) because the narrative stays on track the whole time: Emma Stone intends to write a book and upset her town and that's what she does. Even the sad part of the ending (Viola Davis getting fired) is a consequence that they all had accepted before they began their project.

The "Mad Men" pilot is interesting because it's one of the few episodes where Don starts with "How do I sell this pitch?" and then he successfully sells that pitch in the second half, based on what he's learned along the way. This made it feel like it might be a show about accomplishing goals in straightforward ways, but of course this was rarely the course of the show from then on. Even then, the Peggy storyline in the pilot was showing us a more typical ironic storyline.

The main "good vs. good" in the "Scandal" pilot is "public vs. private", but the "bad vs. bad" version of that would be "chaos vs. control". In one storyline, chaos becomes control (intended), and in the other control becomes chaos (unintended). I suppose you could say in any show with both an episodic and serialized element, the episodic story will often feel more like entertainment while the serialized story will often feel more like art.

Of course, right away, I can think of exceptions: On "Lost" the episodic storyline (the bitterly ironic flashbacks) felt like art and often the serialized story (whatever goal they were trying to solve on the island) felt like entertainment.

(Hmm... here's a big problem with my definition: wouldn't it put daytime soap operas firmly in the art camp and not in the entertainment camp? I can't really get around that, and yet my definition still feels right to me most of the time, as in all of the above examples.)

Thinking more about it, it's not uncommon for students to hear the plot of "Madame Bovary" explained to them and then have them declare "That's just a soap opera"! And certainly when I would recommend the movie "Queen of Versailles" to people, they would say "That just sounds like one of those 'Real Housewives' shows." And in each case you have to say no, because... because... it's just different.

So daytime soaps imitate the structure of literature (such as "Madame Bovary" or "Great Expectations"), rather than entertainment, but they do so in such a silly and frothy way that it nevertheless feels like pure entertainment and not literature at all. The same judgment could be leveled at "Scandal", which has some aspects of a nighttime soap, but it rises above that judgment simply due to the quality of Rhimes's writing.

In many ways, Rhimes is the second coming of David E. Kelly: when her shows are at their best, they feel like complex and thoughtful drama at its best, but the very next week the silliness can tip over the line, and they seem like unintentional farce. That was true of "Chicago Hope", "The Practice", and "Boston Legal", and it's equally true of Rhimes's shows.

I've been thinking about this... would that imply that "A Man Escaped," the Bresson film where the entire story consists of a man preparing for his escape from a POW camp and then escaping, is entertainment? What about the Michael Haneke film "The Seventh Continent" where a family deliberately destroys all of their possessions and then commits suicide? Entertainment? What about "2001: A Space Odyssey?"

Perhaps art and entertainment can't be identified by their handling of intended and unintended consequences alone. Could "simple world" and "complex world" be better terms?

A Crackpot Theory I Don’t Expect You to Buy:

This explains why what I consider trashy entertainment is moving art to someone else, and vice versa. To me, Story X is a big pile of moronic clichés and easy answers; to that guy over there, it’s deep and meaningful, because he sees its answers as true. (Or he wants them to be true so much he tells himself they are.) Meanwhile, the complexities that I see in Story Y as a true reflection of the messiness of life, he considers pointless wankery that wankers delude themselves into believing.

So a story about violent crime could be about the realities of what spawns it, the psychology that allows it to happen, what affect it has on the people directly and indirectly involved, the thrill and horror of it, and the sadness it causes. Or it could be about Batman.

Also, per this crackpot theory, “Art vs. Entertainment” is a question of degree. Both realism and fantasy will exist in any story. The proportion is the issue, and of course, even that’s subjective.

That's a strong theory. But what about horror? Would anyone say a horror movie depicts what we wish could be? Or would you say that it depicts a world where evil is concentrated and easily identifiable (and therefore often vanquished), which makes it fantasy, and therefore entertainment?

It's so hard to draw a line in the sand! The Bechdel test seems rock solid for determining feminist credentials, but "Gravity" fails, and "Weird Science" passes! I didn't like the presumption that drama-and-or-unhappy-ending = literature and comedy-and-or-happy-ending = entertainment, so I drew a new line, and it's pretty good, but it's easy to find exceptions. The line between simple world and complex world works, too (But even then, wouldn't "A Man Escaped" be a simple world?) as does the line between wish-fulfillment and truth, though it's easy to find clear exceptions to all three.

I know that when I read the novel "Americanah" that I was terribly disappointed that the ending felt like wish fulfillment, and I thought "Oh, I guess it's not literature now."

cool, please guidance so that I can create a blog like yours