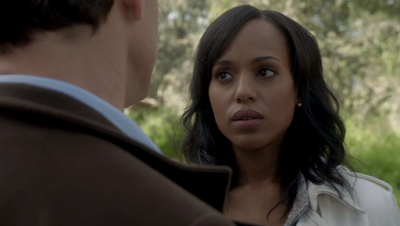 Shonda Rhimes is a dialogue master, and one of the tricks she uses well is ironic set-up and pay-off in dialogue. In the pilot, when the war hero comes to her to clear his name, he keeps insisting that he didn’t kill his girlfriend:
At the time, this just seems like a painful coda which makes his feelings seem even more genuine: Don’t we all want a lover who is also our best friend? It’s only when she discovers that he’s gay that Olivia realizes what it really means.

Rhimes uses this same trick in the other storyline. Olivia insists on meeting with the president so that she can look in the eye and test to see if he’s telling the truth about not having an affair with his accuser. President Fitz looks squarely at her and says, and...
And of course that’s true: He loves Olivia, and he had the affair to try to forget her. That’s just what Olivia wants to hear on a subconscious level, but on a conscious level she lets herself believe that he’s talking about the first lady, so she can convince herself to the take on this smear job. It’s only after she’s driven the accuser to attempt suicide that she realizes that Fitz has tapped into her subconscious desires in order to manipulate her into doing evil (which is one reason that he’s one of the most realistic presidents on TV).

I’ve said before that one of the advantages of mastering set-up and pay-off is that it keeps down on producer interference. It convinces them that your script is a tight ship, and any poking will only sink it. Indeed, though the script online is still called “UNTITLED SHONDA RHIMES PROJECT”, it’s 90% similar to what made it on the air, including these two exchanges. They know they can trust her.

(Of course, the most deeply ironic line to get flipped over in the pilot is the description of the firm as “gladiators in suits”, but that brings us into our next category…)
Posted by Matt Bird at 8:00 PM