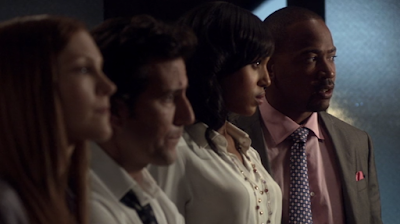 I’ve written about how it’s always best to differentiate an ensemble using their current actions and attitudes, rather than by giving them “interesting” backstories. This is one of many aspect of TV writing that Shonda Rhimes has mastered. In the script for the “Scandal” pilot, there are scenes in which the team members talk about their backstories, but by the time the episode made it to the screen, those scenes had fallen out, because they were no longer needed.

The quickest way to differentiate between an ensemble is to let them all answer the same question in rapid succession, and a great way to do this is to take a vote. In the pilot, the case of the week literally walks in the door: a right-wing-poster-boy-war-hero stumbles in covered in blood, insisting he didn’t kill his girlfriend. Shortly, our gang is watching him through glass, and debating the case:
A vote like this does so much:
Of course, the downside of this particular vote is that one of the show’s top assets, “Lost” vet Henry Ian Cusick (Stephen), left the show without a word at the end of the first seven-episode season: He had seen the pecking order and he didn’t like it. Ultimately, he decided that Rhimes and Olivia felt the same way: He was a pretty face and a big name that would please ABC, but would never be a match for the lead character. As with some of the other shows we’ve looked at, this is a show that tends to sacrifice the ensemble to empower the hero, and it suffered a bit for that before it found a new equilibrium.

(And the other downside is that this gave Rhimes license to come up with new backstories for those characters once the show had gotten more nutty. The version of Quinn’s backstory we get in the script actually makes sense, as opposed to the ludicriously pulpy version we got in the second season!)
Posted by Matt Bird at 5:04 PM