Straying from the Party Line: Wrapping Up the Drama a Little Early in The Fighter

Here and here, I say that the dilemma needs to last right up until the climax or sometimes past it. Either the climactic action resolves it, or it gets resolved afterwards in an epilogue. This is because any climax that happens after the resolution of the dilemma will feel meaningless as the story “rolls downhill.”

In fact I previously pointed to this very movie as an example of how to do this right:
So instead of showing the Gatti fights, they ended with the fight in which Ward wins the championship belt from Shea Neary, but even then, the emotional dilemmas (with his brother, his mother and his girl) are still resolved a few scenes before that fight, and the championship fight we see is merely the payoff to that resolution...and that’s fine. 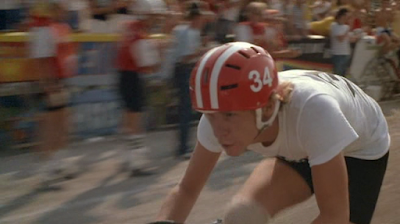 Another movie with a similar structure is Breaking Away: There too, Dave resolves all of his issues with his dad, his girlfriend, and his friends, and then begins the triumphant final bicycle race. As with The Fighter, the result is an exhilarating stand-up-and-cheer triumph, and we don’t really care that things are rolling downhill.

The implication is clear: sports movies get a little more slack. The alternative, after all, is to have the person the hero is having a problem with sitting in the stands, allowing them to silently communicate their emotional breakthrough just before our hero wins the match. It can be done, but it’s far from ideal, so it’s okay to wrap the emotional beats up a little early, and end with nothing but triumph. In some sports movies, the actual victory is just a victory lap.

(How much of an extension on the deadline do you get? Probably only about ten minutes, so don’t push it!)
Posted by Matt Bird at 11:33 PM

Labels: Straying From the Party Line, The Fighter