Straying from the Party Line: Micky and Mookie as Passive Heroes

The Fighter is the second movie we’ve examined that features a passive hero, but Mookie in Spike Lee’s Do the Right Thing was a far more extreme example: Not only was Mookie passive, but the movie was not about the solving of a large problem, which is extremely rare. The Fighter is a far more traditional movie: there is a large problem, and the hero is committed to solving it, but nevertheless he cannot snap out of his passive nature in order to do so. 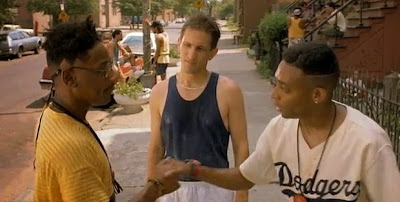 One might expect, then, that this is the big flaw that Micky learns to overcome, but that’s not really the case: he remains relatively passive right through the end, except for one key moment.

Micky enters the final quarter of the movie facing a problem: he has two groups of people that love him and want the best for him, but neither group can give him everything he needs, and they hate each other’s guts. Even now, however, he does not to take control of his own life and start making his own decisions. Instead, he breaks out of his passivity just long enough to stand up to them all and insist on having them both in his corner…then he does nothing to make that happen!

The two groups then work out their differences without his help, and he happily goes back to passively accepting the advice of the newly-merged group. He has become proactive and solved his problem, but he has done so in the most passive possible way.

Of course, passive heroes are supposed to be the third rail of writing: instant death upon contact. So why don’t we get overly frustrated with Micky? Two reasons...
And here’s another interesting contrast between Micky and Mookie: They’re both peacemakers, but Mookie is trying to keep a peace in Bed-Stuy that is, for the most part, beneficial to all, whereas Micky is trying to keep a peace in his family that is detrimental to all. Thus Mookie’s belated abandonment of peacemaking feels like a tragedy, while Micky’s is clearly a triumph. Yes, Micky quickly falls back into his conflict-averse stance, but now he has replaced the detrimental peace with a beneficial peace, so he can happily go back to his default peacemaking stance.
Posted by Matt Bird at 8:00 PM

Labels: Character, Straying From the Party Line, The Fighter