Rulebook Casefile: The Way the World Works (and Doesn’t) in The 40 Year Virgin 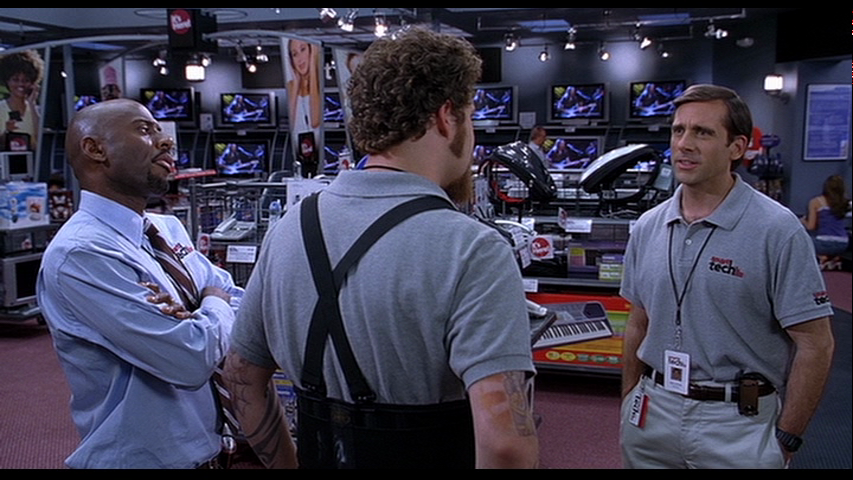 My pick for America’s most underrated movie critic is John Powers, who’s occasionally featured on the NPR show “Fresh Air”, where his rising-in-pitch exasperation with modern movies is a consistent delight. One of my favorite golden-oldies was his withering criticism of You’ve Got Mail, the lame remake of The Shop Around the Corner. Powers complained the new version had to be about a shop owner, rather than mere shop employees: “Of course not: then they’d be losers!”

I think of that line often when I see movie after movie about that mythic beast: the small business owner. So you can understand how happy I was to see a movie about everyday shop employees, in which that wasn’t seen as a shameful occupation.

Why is Hollywood so afraid of people who work retail? Obviously, the biggest reason is that this is a common social attitude. If you’re at a party, you’re fine as long as you say, “I have a start-up” (even if it’s a pipe dream that will never make a cent) or “I’m in graduate school” (even if it’s plunging you into a lifetime of debt for a worthless degree) but heaven forbid you say you work retail (which actually brings money in instead of blowing it out.) Even I tend to reflexively pity that answer, thought I quickly upbraid myself.

In movies and TV everybody must either have or aspire to have their own small business, as if that’s a wise goal in the modern economy. Only losers put up with the indignity of a stable income.

So I loved The 40 Year Old Virgin right up until the end when it turns out that, of course, Andy dreams of starting his own stereo store, and, lucky him, makes a half-million dollars to get started by selling his action figures. It didn’t have to be that way. Over the course of the movie, as Andy gains in confidence, he quietly works his way up from the stockroom to the sales floor to store management. Managing a chain store is actually a much better gig than starting your own, especially if you have a brand-new family, but that’s not the Cowboy Way, and every movie hero must be a cowboy in the end.

This is one of the things I greatly admired about Bridesmaids (which was also produced by Apatow): The backstory is that Annie wrecked her life by following her dream and opening her own bakery. That’s the way the world works, but it takes a lot of courage for a Hollywood movie to admit it.

Nevertheless, The 40 Year Old Virgin gets a tremendous amount of credit from me for offering a rare portrayal of content middle-income Americans for most of its running time.
Posted by Matt Bird at 12:00 PM

I like the idea of a diversity of jobs portrayed in movies/TV. But I think in any type of show or movie where the job is either the main storyline or a big secondary storyline it falls into the 30 Rock situation you mentioned in a post a long time ago. If the character doesn't have decision-making power they are much more limited.

But I agree there was no particular reason for Steve Carell to want to open his own store with the money in 40 Year Old Virgin.