So I’m hoping that the “Breaking Bad” checklist finally looked good on everybody’s computer, whether desktop or mobile. I’ve been fooling around with the format on these things forever, but I feel like I actually have it down. To celebrate, I’ll be reposting most of the old ones, all of which I’ve updated for Checklist v5. As I do so, I’ll revisit some of them, starting with Iron Man… 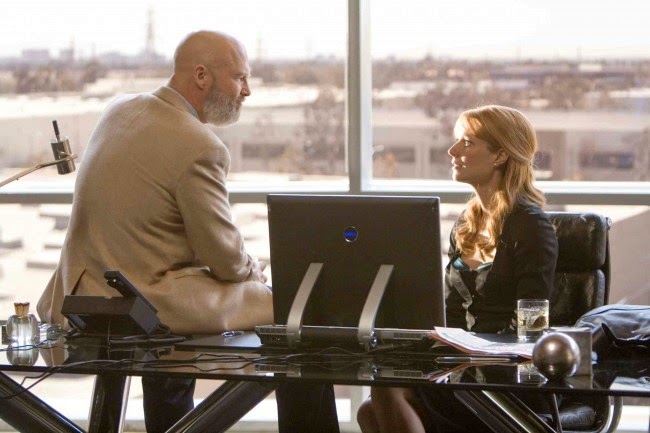 The first time I evaluated this movie on the question of hiding plot contrivances with set-up and payoff, I focused on two that it failed to disguise:

But upon re-examining the movie, I decided that I’d been too hard on it. The fact is that plotting action is extremely hard. You don’t just have to work out the story beats, you also have to time them precisely to all the other beats, because of the urgent nature of the situation, and, of course, you have to keep endangering the love interest without making her/him stupid or making the hero seem callous for endangering her/him.
If you’ve ever written action, you know how nearly impossible this is, and it’s all the more frustrating because nobody notices your accomplishment. Nobody ever walked out of an action movie saying, “Wow, they did a great job keeping the intelligent love interest constantly in danger for believable reasons!” They only notice if that isn’t true.

Keeping that in mind, the plotting in Iron Man is actually really elegant, and it demonstrates one trick that I’ve never highlighted before…

When you write an action movie, you have to constantly create impossible death traps and then have the hero get out of them anyway. That’s where the adrenaline rush kicks in. If the problem is within the scope of the hero’s standard skill-set, then it’s not exciting to watch him or her triumph. If, on the other hand, the hero utilizes an escape that’s never even been hinted at, the audience will feel cheated. So the whole job is to quietly set-up a future solution, then trick the audience into forgetting about it just long enough to freak them out about the next big danger…only to have the pre-planted solution unexpectedly pay off.

This is really hard to do, but Iron Man shows how it’s done: If you’re going to plant a solution, make it seem like a problem at the time, so that it won’t occur to the audience that this might come in handy later.

One example is the rescue of Pepper, when Stane catches her downloading files in Tony’s office. Let’s look at the potential ways Pepper could get away…

But we can’t have that rescue be totally unexpected, because that would feel like a cheat. So how do you set it up surreptitiously? By introducing the solution as a problem. In addition to dealing with Tony’s outlandish needs throughout the movie, Pepper also has to run interference for him, putting off people like Mr. Coulson, a government agent who keeps meekly requesting a moment of Tony’s time. By making Coulson a persistent annoyance, we don’t notice that he’s being set up to be there to rescue Pepper when the time is right.

(…and even then, it feels like she’s rescuing herself, because she uses her special skill to solve this life-threatening situation: scheduling access to Tony. It just goes to show that any special skill can have a nice pay-off!)

The movie does this again with issue of icing. At the end, when Iron Man fights Iron Monger, it has to be clear that Stane’s armor is more powerful than Tony’s so that we’ll feel that adrenaline rush, but Tony has to defeat Stane anyway in a way that makes sense. Once again the solution was established as a problem: When Tony was first testing out his armor he took it too high and almost died when it iced over. This felt like its own harrowing moment, not a set-up for a later rescue, but it’s the perfect solution to his later problem

(And, yes, this taps into Tony’s special skill: Stane may be able to steal and max-out Tony’s original plans, but he doesn’t have Tony’s insatiable urge to endanger himself and then tinker around to solve the problems he encounters while doing so. Thus Tony has solved the icing problem and Stane hasn’t.)
Posted by Matt Bird at 6:46 PM