Rulebook Casefile: Everything and the Kitchen Sink in the “Breaking Bad” Pilot 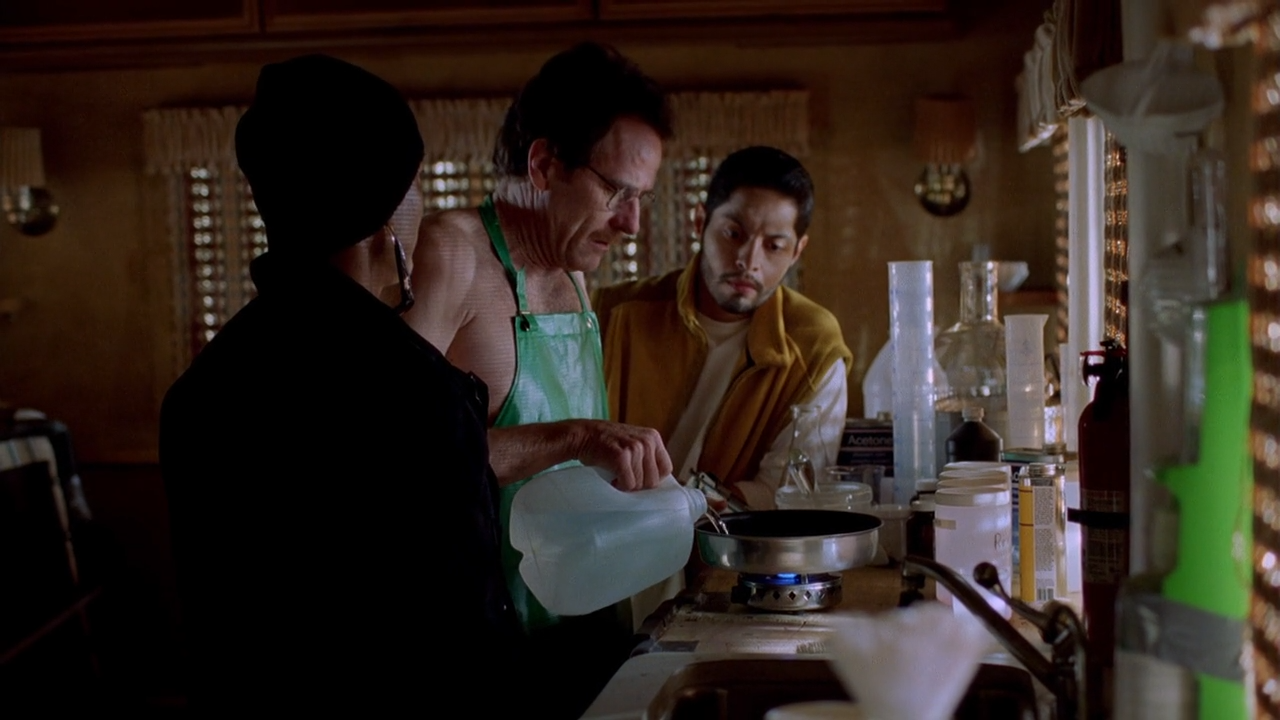 As I mentioned before, it must have been very tempting to end the “Breaking Bad” pilot with Walt’s proposal to Jesse that they cook meth.

After all, Walt starts the pilot so far away from that moment, and it takes so many details to move him towards it (the birthday, getting mocked by the student at the car wash, the cancer diagnosis, getting mocked by Hank, the news story about Hank’s bust, the unexpected reunion with Jesse, etc…) Surely all of that escalation could have filled up the entire pilot.

But the show somehow manages to cram all of those twists into just the first 30 minutes. This leaves creator Vince Gilligan time to fill the second half with a foreshortened version of a typical episode: a drug deal gone wrong, a harrowing brush with death, a chemistry-based solution, and escalating damage control.

What are the advantages? First of all, it ensures that the first half really flies, which is great, because Walt’s life in this section is really frustrating and he’s not really pursuing any goals yet (Or not that we can see...In retrospect, he may have been considering this life change even before his diagnosis.)

Most remarkably, it manages to do so without ignoring small character moments that have nothing to with the plot. In one odd little scene, we see Walt drive home from school in his Aztek and notice the handicapped mirror-hanger. He gets annoyed by it and tries to toss it in his glove compartment, which won’t close, forcing him to bang it over and over. It’s a little 20 second moment, but it goes a long way to assure us that this isn’t just a Rube-Goldberg-contraption of a story mechanistically headed towards one final outcome. (It’s also a nice hint of suppressed frustration with his son’s handicap, despite how admirably he interacts with Walt Jr. the rest of the time)

But the best reason to compress the story is to ensure that the pilot delivers not just the premise, but also the promise of the show. We see how things might go down and go wrong every week, and we see that it’ll be entertaining.

Of course, it should feel ridiculous to move our idealistic school teacher all the way to his first botched drug deal and his first killing on his first day on the job, but the progression of events feels natural enough.  Actually, the final version is even more sped-up than the pilot script.  In the script, Emilio and Crazy-8 show up on the second day of cooking, which makes a lot more sense, but in the finished pilot, they seem to show up on the first day, which implies that Jesse rushed back to town to sell the first batch while the second batch was cooking. Nevertheless, it doesn’t feel that absurd as it goes down.

One neat trick was to have the deal go south instantly because Emilio recognizes Walt from the earlier bust and assumes he’s DEA.  This not only gets Walt into trouble faster, it’s also far more compelling and believable than the lazy version they could have gone with, in which Emilio and Crazy-8 simply come there to kill Walt and steal his product in the first place. It’s always better to have things escalate because of an ironic sequence of events, rather than sheer aggression that doesn’t match the villains’ best interest.

That leaves one last trick, which is something that most pilot writers can’t do: it cheats on the time. The episode takes up a 58 minutes without breaks, which means that, whenever AMC runs it, they have to show it with limited commercials or expand it to 90 minutes, which messes up their schedule.

You might assume that this was because it was developed for HBO or Showtime, but no, it was developed for FX before it made the jump to AMC and FX also has ads. Basically, Gilligan just used the clout that he had accumulated on “The X-Files” to demand special treatment, and he got it.

So don’t try this at home, right? Well, some spec-pilot-writers claim that their pilot is intended for pay-cable, even though they know it’s more likely to find a home on FX or AMC, and they just want more pages. It’s a cheat, but if it gives you the freedom you need to write something as good as “Breaking Bad”, it just might be a cheat you want to take.
Posted by Matt Bird at 8:00 PM

The scene where Walt tries to close the glove compartment is one of my favorites in the whole series. It had me thinking, "Oh, that's frustrating, and Walt's had nothing but frustration since the episode began, but he's gritted his teeth and held it together, so now he's alone and he can fly off the handle and smash things, which will, frankly, come as a relief at this point, because he's earned it." And then he doesn't. He finally gives up and leaves it hanging open, and my stomach knots up tight, and I'm going, "Oh crap, when's he gonna blow?!" For me that scene intensely amps up the tension and suspense.