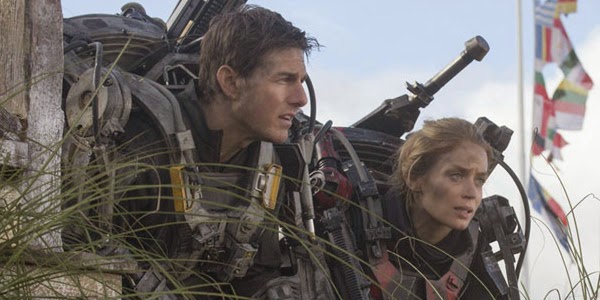 My third problem with Edge of Tomorrow is that it become addicted to using same trick over and over: In scene after scene, it shows Cruise encountering and scrambling to defeat some “new” menace, only to have the audience suddenly realize that, nope, he’s actually already done this before and he actually knows what the bad guys are going to do. The first few times, this is clever and fun, but it quickly wears out its welcome. There are two problems here:
Ultimately, Cruise loses the ability to repeat when he gets an unwelcome blood transfusion that purges the power from his veins. This twist is well-set-up, and fits the logic of the film, and it’s believable enough when it happens, but I don’t think it was the best choice.

Instead, I think that, rather than have that scene early on where Blunt warns Cruise that he’ll stop repeating if he gets a blood transfusion, she should warn him that the power just wears out after thirty times. This would give every scene a lot more urgency, and convince Cruise to stop rebooting himself with little provocation, redoing every moment over and over to get it right.

Maybe put a countdown onscreen of how many regenerations he has left, so every death counts. As it stands now, the movie looks intense, but this change would make the movie feel intense. The audience can tell the difference.
Posted by Matt Bird at 8:00 PM

The point about identification is a good one. But I strongly disagree with the concept of putting a number on the amount of times he gets to reset. The audience would react with dread not at Tom Cruise's predicament, but at learning the fact that they have to sit through all this 30 more times. Plus, leaving the number of resets fuzzy helps us believe that he's learning all kinds of amazing powers over a long period of time - theoretically it could be millions of resets.

I sort of agree with A.D. The counter is a problematic idea for a number of reasons. First of all, if it's really just a superimposition on screen then you're kind of calling out the fakeness of it all to the audience, alienating them Brecht style from immersion in the story, let alone identification with the hero. I feel the same way about the arbitrariness of a number limit like this, which almost calls even more attention to itself as a plot device.

Then there's A.D.'s point that 30 times might seem short to you the storyteller (even if you know you're planning to only show us bits and pieces of each repetition) but it might feel like a pretty long time to an audience who's anticipating seeing all of that.

And finally there's the stuff I was saying yesterday about how the thing we need most in order to identify with this protagonist is just to watch him actively trying to solve his problems, to let the narrative have a little faith in the procedural nitty-gritty of his trial and error progress through the iterations with his extra lives.

Being stuck in a time loop is hellish in GROUNDHOG DAY because it's an eternal recurrence of mind-numbing banality... Until the protagonist learns to Zen up and start appreciating the unfolding moments of everydayness in all their singular suchness.

But being stuck in EDGE OF TOMORROW's loop is both a blessing and a curse in a different way. From the beginning it's clear that the endlessness of the iterations is his only chance. Otherwise he's dead and so is the rest of humanity. So it can't feel like a problem in the same way that Bill Murray's stuckness does, because for Cruise the loop is a relatively safe bit of space-time to be in.

A ticking clock is something people often look for in a thriller. I get why you're trying to find a way to insert one here. But maybe, in this case, more than a time clock what the story needs is any kind of concrete downside complication to continuously re-experiencing the loop -- like the doubles or the side effects they characters in PRIMER start to notice.

I think what the story missed was an active antagonist for the main character to face. As it is, EoT is effectively a man-versus-nature story, with Cruise's character facing situations that, while hostile, are indifferent to his intentions.

What I would have done is given the Alpha that Cruise initially killed the very same cognisance through time that Cruise gains. This could be set up as significant reversal and key story moment by having the Alpha - who, through several iterated scenes has been a predictable 'background' feature - suddenly turn on Cruise. On the next iteration, the Alpha isn't there at all, and from then on, each scene should be weighted with suspense as Cruise and the Alpha continually attempt to predict and outwit each other, with Cruise a huge underdog in every situation.

That would play a little more with the central conceit, and could be used to make a comment on how escapist activities consume life as much as they provide transient pleasures.

If that actually happened to a soldier under those circumstances, after a while he'd mentally crumble. Everyone dies, including him, and he can't fix it and he can't stop reliving it.

He could have a tremendous Long Dark Night of the Soul when he's up against a part of the battle that he simply can't get past, and it eats at his mind. He can't figure out a way around it, and everyone keeps dying, and nobody believes him, and he can't escape, even in death.

Think about that. That's a clear vision of Hell itself. He can't even escape in death. Failure and pain for eternity. No exit. He gives up and dies without even engaging in battle, time and again. He doesn't care anymore.

Then, after a while, he picks his ass up and figures that he can't do anything else but keep trying, because what else is there? With his renewed effort, he can at least have his dignity. Of course, there remain insoluble problems threatening to rob him of that dignity...

Yeah, it's GROUNDHOG DAY with aliens and guns, but that's what the movie is already. Go with it.

Harvey's suggestion is intriguing and not unrelated to what I've been saying about taking the stakes more seriously, about seeing the iterations as opportunities to tie in the haunting futility of the repetitive re-living so common in cases of PTSD. But, of course, this is the sort of film -- a military sci-fi psychological horror film about combat stress, even more austere and serious than it is in the source novel -- that no Hollywood studio or star would ever want to make. And that fewer audiences still, present company excluded, would pay to see.

It would also be interesting to see the "How to Train Your Dragon" version: A guy tries to kill the bad guys hundreds of times until he realizes that it's a quagmire and he has no choice to try to make peace. Maybe he finds out that we actually attacked the aliens first and tracks down the general responsible for pitting the two sides against each other, etc.

j.s. makes a good point, I think, about the deck being stacked from the beginning against this kind of movie being anything other than throwaway entertainment. "Edge of Tomorrow", as a live-action, wide-audience movie, would be hard to make without a big budget, and a big budget necessitates involving big names. And the moment a big name like Tom Cruise gets involved, who has a pre-existing persona to maintain, you can pretty much say goodbye to any kind of interesting or playful or meaningful deviations from the basic expectations of the genre: good-looking person uses cool-looking technology to do cool stuff. The interesting ideas that have already been proposed here in the comments would make for a better movie, but that movie would only get made on a smaller budget ... animation, maybe?