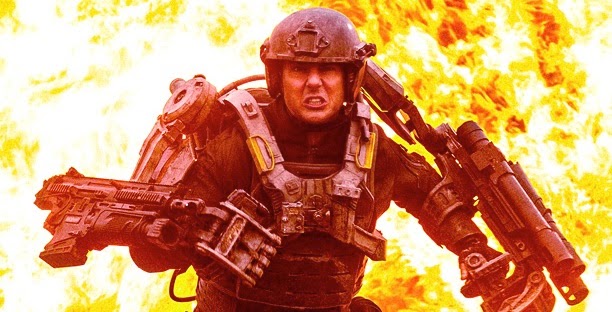 And the fourth problem with Edge of Tomorrow is the way it falls apart at the very end. The plot logic is remarkably solid right up until the eplogue, when it wrecks itself in a depressingly familiar way.

Yes, it’s the return of the same problem that plagues Superman Returns, The Dark Knight Rises, The Avengers, Pacific Rim, Star Trek Into Darkness and many more: the hero gloriously sacrifices his life to save everybody else...only to wake up afterwards just fine.

Of course, that may sound inherent to this particular movie’s premise, but it’s not, because Cruise has lost the ability to repeat and has to really win without any do-overs, which makes the finale far more exciting…until the very last second when he regains the ability just as he gives his life to defeat the bad guys.

So Cruise wakes up in the past all over again, but this time it’s a past in which the bad guy has still been defeated…even though all the guys who died defeating him are once again alive! Huh? In all of Cruise’s previous reboots, his previous progress past the point of waking up was undone. Why should it be different this time?

For a movie that had devoted so much brain power to making this (literally) loopy premise work in a rock-solid way, this is just such a slap in the face, to abruptly abandon all of that skillfully-constructed logic at the very end.

It’s like we have this idea that nobody can just win anymore, because that would somehow be “bogus” or something. “Heroism” has become synonymous with “sacrifice.” You can’t have one without the other, apparently. And yet they still want to give us happy endings, so they just make it a consequence-less sacrifice every damn time.

Here’s an idea: if you want the hero to win, just let him WIN. Let him struggle and suffer and barely kill the bad guy, of course, but skip over the phony sacrifice scene and just let good flat-out triumph over evil for once. OR have him sacrifice himself and stay dead. Either situation could have been pulled off in a meaningful and satisfying way, but they once again tried to both, which just alienates and pisses off the audience.
Posted by Matt Bird at 8:00 PM

Okay, but why don't you say the same thing about Harry Potter?? Come to the dark side...

My husband actually said, as we walked out of the theater, that Cruise should have died in order to make the sacrifice more meaningful. But I disagreed because that's just not how a popcorn movie is supposed to end. But I did find the "false sacrifice" to be pretty cheesy. Probably better just to skip the sacrifice altogether since we all know the popcorn hero never dies.

On the other hand, Harry Potter *didn't* need to be a popcorn hero, imo. Just saying.

It bugged me in Harry Potter, too!

Okay. I remember differently in another post but maybe I was reading your comments the wrong way. I'm glad we agree. :)

Nimoy's passing reminded me of the super phony remake of the sacrifice in KHAN that J.J. Abrams pulled in STAR TREK INTO DARKNESS. The darkness isn't all that dark if you can just reboot your irradiated self with magic blood. I mean, what happened to having enough respect for the audience to wait an entire movie to revive a character with terraforming tech?