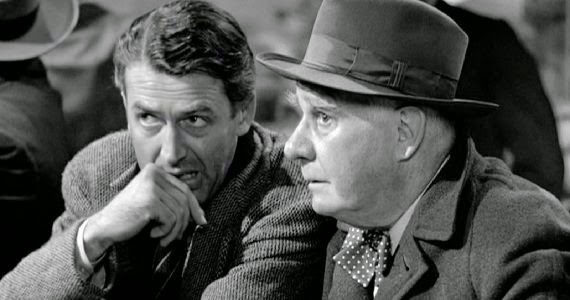 There are many types of ironic dialogue, some are intentional and others are unintentional.

Sarcastic dialogue uses intentionally disingenuous phrasing to highlight the hypocrisy of a situation. We’ve all known lots of sarcastic people, so this type of dialogue is certainly true-to-life and it can therefore be a strong element of a character’s voice, but it’s important to remember that this sort of intentional irony is not going to create the same amount of meaning as unintentional irony.

The audience prefers to see what the characters can’t see: We want to be one small step removed from the story, seeing some things they miss. By contrast, we want the characters themselves to be in it, not outside of it. Well-written sarcastic characters think they can see the irony of their situation, but we see that they don’t really get it. George Bailey in It’s a Wonderful Life is a wonderfully sarcastic character, but he is unaware of the larger ironies of his life until Clarence the angel points them out.

Then there are times when characters engage in Blatant Talk About Irony. This should almost always be avoided. Irony should be the air your characters breathe, but they should not be aware of it, just as we are not conscious of each breath. Whenever characters talk about how ironic something is, the audience groans.

Here’s a particularly atrocious example of the above: Bette Davis followed up her big comeback, All About Eve, with a very similar role, but this time the results were disastrous: In The Star, she played a washed-up ex-starlet who tried to settle for a down-to-earth longshoreman played by Sterling Hayden. Eventually, the grubbiness of her new life causes her to snap, and she smashes a store display to steal of a bottle of super-expensive perfume on display. This results in one of the worst scenes ever written…
No, no it isn’t. When irony is openly discussed, it withers on the vine. If your audience hears it, they won’t feel it. Next, we’ll move on to our first type of unintentionally ironic dialogue…

So that dialogue would have been okay if Hayden hadn't explicated it so on-the-nose-ily? Because then it would be like a bad version of the sharing up scene in THE WILD BUNCH:

-Silver rings!
-Them's washers.
-Dagnabbit!
-Just shiny holes full of nothing...
-...like the dream of our being outlaws in this here day and age.

Can irony ever be too subtle? My favorite response to ALL ABOUT EVE is Paul Verhoeven's SHOWGIRLS, which is presently undergoing a modest critical re-evaluation but still gets almost no credit from the vast majority of critics, scholars and audiences for its masterful and strictly deadpan employment of satire and irony. Such that the few early fans of the film (and many of the current appreciators) don't even agree on how serious or self-aware the film intends to be or why they ought to enjoy it. Is it so bad it's good, a colossal failure of taste and judgment at every level? Or is it all some elaborate carefully crafted hyperreal camp critique of American/Western capitalism, as critics like filmmaker Jacques Rivette have asserted?

And on account of WHATEVER HAPPENED TO BABY JANE I can't help recommending Robert Aldrich's underrated AUTUMN LEAVES, wherein poor Joan Crawford just kind of wants not to be a spinster anymore. The film won Best Director for Aldrich in Berlin and was reportedly a favorite for Crawford among all her films.

My Aldrich watching goes deep, but I've never seen AUTUMN LEAVES. I'll have to check it out.

As for your question about whether that dialogue from THE STAR could have worked, I actually mentioned this scene to a friend in an email a few months ago and he had the exact same question. This is the answer I gave him:

"Yes, I think that story from THE STAR might have worked if Sterling Hayden hadn’t pointed out the irony, but it would have been tricky because something not having a smell is not easy to convey onscreen without talking about it, which would inevitably have hung a lamp on the irony."

Have you seen Edge Of Tomorrow? After being press ganged into the army, Tom Cruise's new sergeant tells Tom Cruise that he is the master of his own fate, and then says that that statement must seem ironic to him (because he's being forced into a battle he doesn't want to fight) while looking straight into the camera no less. Cruise then relives the battle over and over again, each time trying to find out how to survive so that he won't have to loop in time again. I had to roll my eyes at the insistence to telegraph the theme to the audience. And actually this bit of dialog plays twice--we get to hear it again after one of Cruise's loops.

EDGE OF TOMORROW isn't nearly so crappy in most of its pre-Cruise incarnations -- the original Japanese novel, numerous previous drafts of the script, etc. Here's a story that used to be essentially about the deep ethos of military sci-fi, many aspects of which were shared with serious gamers -- especially the conflation of repetition with learning.... But what Cruise brings to the project is exactly the wrong kind of charisma, a sometimes good writer (Christopher McQuarrie) who hacks for him, and some consistently poor judgement about what kind of tweaking any given story might need. For me, Tom Cruise is a sort of black hole of cinema, sucking all of the light and life out of anything that gets remotely close. Nowadays projects tend to succeed in spite of him, not because of him.