And so, after all this, we arrive at the thing I really hated about Pacific Rim…not that this is the only offender, because the same damn thing happens at the end of Superman Returns, The Dark Knight Rises, The Avengers, Star Trek Into Darkness and many more: The hero has a long, agonizing sequence where he sacrifices his life so everybody else will live...and then it turns out he’s just fine. 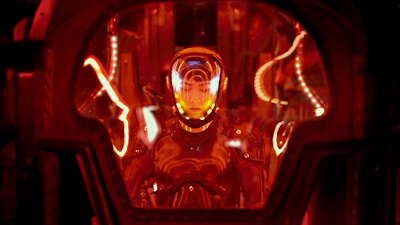 In this case, our lunkhead hero forces his co-pilot to eject to safety so that he can die saving everybody. And it works: she gets to safety and he just barely manages to complete his suicide mission at the last second…and then he easily ejects himself to safety as well.

This is the ultimate slap in the face to the audience: they force us to choose between our heroes, feel sad but proud of our hero’s final sacrifice and noble death, only to then say “oh, nevermind”, which just guarantees that we’ll feel nothing on our way home (nothing but annoyed, that is). 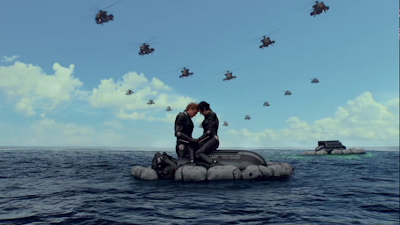 Once again, the audience is left to ask “But how could he survive what he and everybody else clearly understood to be a suicide mission? And why would the movie instantly deaden all those emotions it had briefly created?” Then you have to say, “Oh, I guess because of the sequel”...But there are two problems with that:
But Star Trek Into Darkness was the slimiest example, because they shamelessly lifted Spock’s tearjerking death scene from the original Wrath of Khan...in a way that totally reversed its meaning. In the original, the whole point was that Kirk had to experience his first big irreversible loss, realize that you can’t win them all, and finally grow up...but in the remake, Kirk himself dies, but then everything turns out fine and Kirk presumably learns the opposite message: “Que Pasa, no worries, dude!” 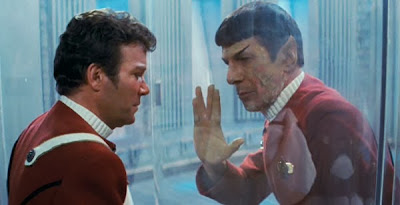 But wait, you say, in the original series Spock did eventually come back! Yes, but that was a different movie, three years later, after the characters and the audience had years of mourning. In the remake, Kirk was dead for all of ten minutes! Feel sad! Now feel happy! The end! When they tell us to feel horrible, and then immediately say “nevermind!”, all those feelings that they’ve summoned up just curdle in our stomachs and turn into contempt.

This sort of thing poisons our ability to enjoy any movie. The only way to protect yourself against this sort of insulting emotional abuse is to take a “you’ve fooled me too many times” attitude whenever any movie asks you care.

But let’s go back to Star Trek III: The Search for Spock, because that shows the greatest irony here: Presumably, these movies wimp out on killing the hero because the studio insists that their star be around for sequels. But what if Pacific Rim had ended with Hunnam disappearing into the breach, and a blast coming out that seals up the breach, and then all of his colleagues memorializing him as the credits rolled. Would they really have been screwed over if they wanted him back for a sequel?

Couldn’t Pacific Rim 2 begin with his co-pilot getting a twinge of a mind-meld from Hunnam and realizing he’s still alive on the other side of the breach, and he’s warning about a new attack, and they have to go rescue him? That sounds like a pretty interesting movie, right?

Instead, they’ve reset everything back to zero, which is actually a horrible place to leave it. What’s the sequel going to be now? The breach reopens, more monsters come out, and our heroes suit up again to have another fight. Ho-hum. Resetting the status quo at the end of your movie does your movie and your sequel no favors.

But wait, tomorrow we’ll get one final thought, also about this ending…
Posted by Matt Bird at 8:00 PM

Agreed that this is a real story-breaker. Of the recent offenders, the only one that didn't bother me much was The Avengers, for three reasons.

One, Iron Man's "big sacrifice" wasn't as heavily touted with "oh noes he done sacrificed hisself for us" as some of the others, so his survival didn't cost too much audience involvement; two, it was a bit of a character moment -- a reversal of Stark's flip comments to Rogers on self-sacrifice and teamwork, showing that he'd changed; and three, the superhero genre has this sort of malarkey built into it: "Oh noes he's dead oh wait he's fine." As long as you don't hammer on its Great Big Importance or spend too long on the fakeout, a superhero story might be able to pull it off. Nobody in the theater thought Iron Man was really going to die there, did they? Escaping certain death is what superheroes do, man!

By contrast, TDKR hammered on the bit too long and hard. If Bruce Wayne popped up a minute after the big kaboom and they'd skipped all the post-Batman eulogizing, it wouldn't have been so annoying.

Then there's Star Trek Into Darkness, a movie so godawful I can't even. "Kirk dies then gets better because KHAN + TRIBBLES = IMMORTALITY" took already crapful movie and lowered it to a whole new level of encrapulation. I felt bad for the cast and crew.

How could I forget TDKR?!? (Actually, I should be grateful that I've now forgotten TDKR)

I agree that The Avengers was the least egregious in this area, but tomorrow, for the finale I'll talk about another problem shared by Pacific Rim and that movie.

This is why I think Harry Potter should have died. *ducks*

A death fakeout that worked really well: the one in Wall-E

Guillermo del Toro and Travis Beacham hasn't learnt nothing from the ending of 'Armaggedon'. At least Michael Bay didn't fool the audience making Bruce Willis jump into a escape pod before the asteroid exploded...

Curious about your thoughts on E.T. We're allowed to think he's dead and the movie's wrapping up. What did you think Spielberg and Matheson did to genuinely avoid E.T.'s resurrection feeling like an emotional cheat? haven't seen the movie in a while, so I'm not familiar with all the beats and would love to hear your thoughts. I'm catching up on your Pacific Rim coverage and its most welcome.

Here's how old I am: I haven't seen ET since 1982! Unlike Parker, I would say that it worked with Harry Potter, and I agree with Anonymous that it worked with Wall-E. I suspect one reason that all three work (and why Iron Man's wasn't so bad in The Avengers) is that these characters didn't give speeches about their sacrifices.

I haven't seen ET in decades, but from what I recall, the title character's death wasn't a sacrifice; it was simply a tragedy. He didn't die for Elliot, he died because he was stuck on Earth. The story was heading in that direction throughout, so it didn't feel like a cheap bit of melodrama, and his resurrection fit the story as well, so it felt uplifting rather than cheap. Elliot was trying to save ET, and just when it seemed that all was lost, it turns out that he did. Awwwww.

Is it me or is the elephant in the room here the Christian Bible, specifically The New Testament? So is Easter the primal, founding cheat in Western storytelling? Or are the final twists in the Gospels somehow more like Star Trek 3?

While we're at it, what about clapping for Tinker Bell, which I've always felt was the biggest lie of my childhood, beyond even the silliness of the Tooth Fairy. I can't remember it, but my mother reports that I refused to clap. At least Spielberg never had the temerity to ask us all to cheer E.T. back to life.

Barry Morrow (Rain Man, Bill) has said that the biggest problem with Hollywood is "nobody dies anymore."

Summed up, it was something like, "A good character wants something, and he's going to work to get it until he gets it or dies trying. But they don't do that anymore because of sequels."