Storyteller's Rulebook #201: Closure is the Opposite of Emotion aka Don’t Let Your Characters Read the Script!

This week we’ll have the final four and then a long-promised huge post that is NOT about Pacific Rim, I promise!

At the end of Pacific Rim, two pairs of co-pilots are going off to fight the final batch of monsters. Charlie Hunnam and Rinko Kikuchi are getting in one robot, while Idris Elba and Robert Kazinsky are getting in the other. It seems unlikely that they’ll all survive this battle. Then a number of ominous things happen: 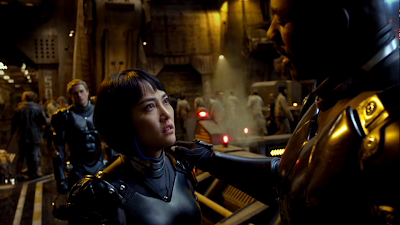 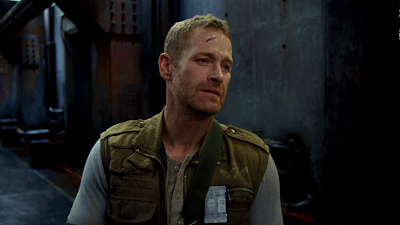 Okay, so now it’s very clear that these guys are going die…and yet we’re supposed to have another half hour worth of suspense about whether or not they make it? I found myself feeling that surely this must be a fake-out and the other two would die…but no, it happens exactly the way we all assumed it would.

Why does one pair say all those good-byes and the others don’t? Because they’ve all read ahead in the script…and as soon as we see those scenes, we have, too. 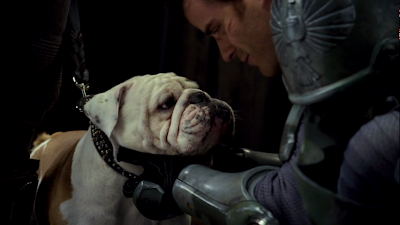 These scenes were supposed to make the deaths of these characters more emotional, but they have the opposite effect. Dying won’t be that sad now, because at least they’ve had a chance to get closure with all their loved ones. They want to make us worry more about these characters, but instead we worry less. We’re re-assured that there won’t be any surprises and so we’re already halfway out to the parking lot in our minds.

Just because the audience watches people feeling an emotion on screen doesn’t mean that the audience will share that emotion. In real life, you only realize that you really care about someone when you start worrying about them all the time.  The true source of worry is uncertainty. “Do I dare to care about this person, even though I don’t know how it’ll end?” When you eliminate the uncertainty about a character, whether you’re certain the character is either going to live or die, you eliminate the emotion.
Posted by Matt Bird at 12:00 PM

Good one. Far better that the characters just say "I'll be back in an hour, keep my dinner warm" and then unexpectedly run into extra trouble

Is it any surprise that BREAKING BAD (spoilers follow!) is the poster child for how to handle this correctly? The show kept us all guessing right up to the end, so much so that I recall a number of people telling me that Hank would find some way out of that apocalyptic showdown with the Nazis when the writers left us hanging between two final episodes. And the show itself was so volatile that you really could imagine it was possible for more characters to die at any given moment in the last season.

This also reminds me of a quotation I've heard attributed to Frank Capra: "A tragedy isn't when the actors cry, it's when the audience does." And of course of the intense emotion that comes at the ends of the otherwise extremely restrained films of Robert Bresson (Btw, Matt still really needs to see A MAN ESCAPED).

And hey, I still haven't seen "A Man Escaped", but I've got "Diary of a Country Priest" on my DVR and I almost watched it today, so that counts for something, right?

I wouldn't normally warn someone off of any Bresson film. But in your case, given the sorts of things that are known to turn you off to art films, I worry that if you watch DIARY OF A COUNTRY PRIEST first, you might never be inclined to see another one. Whereas A MAN ESCAPED has a story so compelling that some people I've shown it to hardly notice it's arty at all. There's a beautiful new transfer out via Criterion on Blu-ray, DVD and HuluPlus.

A MAN ESCAPED is great because it's not arty in any of the ways that the word "arty" often connotes. It's a barebones film that just shows a man escaping from prison camp, day by tense day. The arty aspect is Bresson's minimization of psychology and refusal to "amp up" anything. The effect is anti-dramatic (in the sense that the theatre is dramatic) but it's perfectly suited to the medium of film. Booyeah