So what’s this movie about? The first answer might be “nothing”, but that couldn’t be more wrong: there are actually lots of twinges of real life national pain...but they’re all mentioned in passing in a hypocritical way: 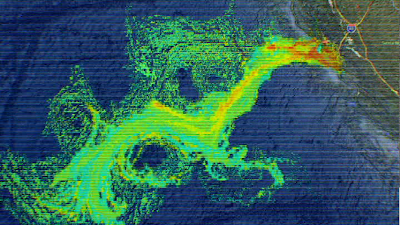 But the answer to environmental devastation isn’t setting off nukes or killing monsters (even metaphorical ones). And surely the real world alternative to building that wall isn’t to build robots to beat up the “aliens”, is it?  The movie is just tossing in every idea it can get its hands out on without thinking any of it through. It doesn’t extract any meaning from any of these big ideas that it attempt to borrow.

You get the feeling that they came up with the idea, brainstormed a million different possible meanings for it, and then, instead of choosing one, they just used that brainstorm list as their script. This is equally true for both the plot and the theme: Sound and fury signifying nothing.

But wait, isn’t that the definition of the summer action movie? No, it isn’t. Action movies are supposed to feel like pure spectacle, but the good ones subtly use thematic resonance to make us care more, without forcing us to actively think about it on a conscious level. That’s the beauty of the form…when it’s done right.
Posted by Matt Bird at 8:00 PM

Do you mean the Deepwater Horizon spill?

This one reminds me very much of how Brian McDonald (INVISIBLE INK) foregrounds theme and uses it to diagnose and trouble shoot stories, especially when you write "this is equally true for both the plot and the theme."

I can't believe I'm saying this, but it also reminds me of my recent reaction to INVESTIGATION OF A CITIZEN ABOVE SUSPICION, a film that you and a number of others I trust have recommended. Granted, it's a much more interesting and ambitious work. But for me it suffers from some of the same pile-on thematics, with too many big, muddled ideas of what it might be about and too little precise follow-through. And with none of the ideas fully, clearly or successfully dramatized by the narrative.

A story can't justify thematically what it doesn't embody dramatically.

To come at it from another angle, I'd say it's useful in cases like this to metaphor test your story. I can imagine the INVESTIGATION filmmakers' first burst of excited pitching: "The authorities are so corrupt today and so ensconced in their power that I bet they could get away with murder, even if they were obviously guilty." Compare that with the final result: "The authorities are so corrupt today that one could get away with murder, even a petty impulsive act of killing committed in the heat of sexual jealousy; even if he then blatantly framed himself; even if he still further decided that letting a purely innocent guy take the fall wasn't enough -- they had to know he did it and still not charge him (wait, what?); even if he were then somewhat ambivalent about his colleagues closing in and destroyed some of the staged "evidence" with which he implicated his guilty self; even if it was never really clear how he felt about his own power before or after the crime, or how he might have abused it or not beforehand, except for one flashback instance of red-light running in Rome, city of otherwise scrupulously law-abiding drivers; and, oh, he gets away with it all by Felliniesque bureaucratic fiat, after deciding he doesn't really want to (but it was only a dream) -- but why does he decide that again??? Uh, yeah.

MEEK'S CUTOFF is another great art film to try this with. I've had heated arguments with friends who admire the film, calling it a political allegory, etc., refusing to acknowledge that even on its own terms, the film's overwrought metaphors make precious little sense with respect to its hopelessly muddled narrative.

If a story's final details still stand up to the initial metaphor, I'd say it's a pretty good indication that you've got something.

As a counterpoint, here's Adam Cadre's discussion of metaphor churn in Pleasantville:

"Though you will find that the metaphor works on several levels: some reviewers scoffed at the 'no coloreds' signs that pop up in the second half of the film, grumbling that the color in the picture no longer has a consistent meaning... but that's good, innit? It is neat that the metaphor can work on several levels. It's what makes Pleasantville better than simple allegory. The way plot, metaphor and comedy feed on each other is also worthy of note. Jen teaches her Pleasantville 'mother' Betty about the birds and the bees, and suggests she experiment sometime when she's alone (plot); Betty does so, causing the tree out front to burst into brilliant flame (metaphor); David races down to the fire station and finds that he can only rouse them to action by suggesting that a cat is stuck in a tree (comedy); David wins public acclaim for his role in stopping the fire (plot); this brings him to the attention of the other kids, who have him fill in their books for them (metaphor)...it's very well done."

Apples to oranges, though. No one's arguing that a theme ought to equal a transparent sermonizing lesson or staking out a position against complexity and contradiction in storytelling. Just that sometimes it's easy to lie to ourselves intellectually. To cover up giant story problems with a poultice of metaphor. To act as if it's okay to have sloppy dramatics if your metaphor smells important enough. To confuse the ambiguity of life with the lack of clarity of a poorly written narrative.

Applause for the Cockeyed Caravan Commenters! Always a must-read.

Ha! Thanks, J.S., I was confusing two different environmental catastrophes. (I had originally written Keystone XL instead).

Anonymous: I know! I'm so glad we've got a good community. Whenever anyone says "Never read the comments" I always think "But my blog is the exception!"