Two Rulebook Casefiles: The Villain Need a Goal and Clash of Personalities in Pacific Rim 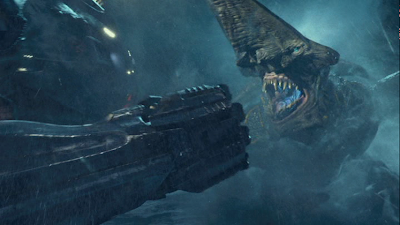 In Pacific Rim, as in the Nolan Batman movies, the villains just want random mayhem, which means that the heroes can’t possibly win: no matter what happens, mayhem will ensue. If the monsters were trying to destroy the robot base, or destroy a certain city, or make their breach permanent, or something, then we could root for them to fail. But if all the villains want to do is crunch random buildings, then we can’t root very well root for the heroes to stop that...mayhem is the whole reason we bought our ticket!

This whole movie is defined by the hero’s goal (close the breach) but its always a stonger choice to define a story around the villain’s goal.

PLUS: All-Too-Common Flaw #8: Clash of Personalities, Not Agendas

The non-robot scenes in Pacific Rim go on forever, so in order to beef up the conflict, they added an undercooked rivalry between the characters played by Charlie Hunnam and Robert Kazinsky. Every time Hunnam gets in an argument with his boss, or loses a sparring match, it cuts to Kazinsky smirking sadistically for no reason. Several times, they shout insults at each other, and once it leads to a fistfight. Why? No reason. 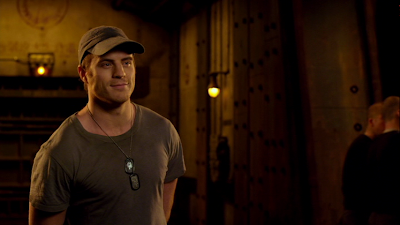 This is the definition of phony conflict. These two characters actually have a shared goal and the same tactics. They don’t disagree at all about how or when or why to fight the monsters...they just dislike each other. 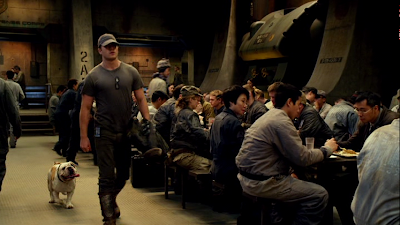 When the bully insults our hero and then struts away in step with his beloved bulldog, sharing a smirk, then guess who the audience admires? Here’s a hint: the audience is always going to be on the side of the dog.
Posted by Matt Bird at 8:00 PM

But aren't the monsters in PACIFIC RIM more like forces of Nature? What's Nature's goal in a survival thriller like ALL IS LOST, if it isn't just to deliver chaos as random as (and perhaps embodied by) the weather?

The mosters are portrayed like forces of nature, but that's a problem. They keep saying that these things have brains, so let's see them use them. I've talked before about how every action scene should be a battle of wits, and I've said that the enemy can't merely be a force of nature, (which is why Jaws needed the mayor, at least for the first half.)

As for All is Lost (SPOILERS), I would say that the movie gains a lot of value from the fact that his boat is struck by a discarded shipping container (and that the same shippers later fail to see him more than once.) It's not just nature that's screwing him over, it's corporations, which is wonderfully ironic because he probably thought he had abandoned the world of commerce altogether.

(And likewise in Gravity, come to think of it, the disaster starts because the Russians were trying to secretly destroy a space weapon, iirc?)

That's a stretch, though, even according to your own formulations. We don't ever get to see global corporations thwarted in ALL IS LOST or the Russians thwarted in GRAVITY.

I had thought you'd be arguing JAWS or more of a classic disaster film scenario like THE POSEIDON ADVENTURE, where the Big Bad is still chaotic monstrous Nature, but both before and after Nature strikes one or more oppositional humans embody/exacerbate the worst effects.

In a "man v. nature" plot, the goal isn't to "defeat" nature. The triumphant moment is not with victory over a foe ("HA! TAKE THAT, SNOW!") but when it's clear Our Hero has survived beyond the threat that cannot be defeated ("HA! FUCK YOU, SNOW! NOT TODAY, YOU COLD-ASS FUCKER!"). Or, less often, when Our Hero dies but in a way that shows his spirit remains unbroken.

Blending these isn't impossible, of course, and many stories do, but you gotta be careful. A plague of monsters standing in as "forces of nature" seems difficult to reconcile. Man Triumphing Over Nature is not a story we celebrate much anymore, unless Nature takes the form of a terrible disease.

I think the goal in this story is closer to "cooperating to stop the existential threat" - it's a really humanistic story through and through, and the drift deals directly with this sort of idea. It's what all the characters are struggling with. So the antagonistic force here does not necessarily need to be genius Kaiju tacticians or anything, it could and should be the internal and external conflicts that stand in the way of cooperation.

The huge problem re: the goal is that that the humans don't actually struggle to cooperate to stop the monsters - they just cook up some nuke plan and execute it pretty easily (sure Stacker dies, and we feel it, but that's largely because of how strong the relationship is with him/Mako - almost completely built on the good will the movie earns with that heartbreaking flashback scene to her as a little girl)

It all goes back to the problem with the execution of the drift concept. Imagine how much more satisfying the story would be if Mako and Raleigh struggle to connect the entire movie, only to finally get it together in the climactic battle to stop the kaiju? And how awesome could it have been if the human governments, who abandoned the Jaeger project, actually came together and supported that final assault on the breach (who knows, maybe China and Russia could have been holding back a few really cool Jaeger designs for the finale).

There was just a lot of missed opportunity, and again, the original script did A LOT more to capitalize on the drift concept/metaphor. It seems like GDT really just wanted to focus on GIANT ROBOTS vs GIANT MONSTERS and thought that would be enough for box office success. I still love Pacific Rim for other reasons, but there's a lot of story potential left untapped.

Speaking of existential threats, that new Godzilla trailer is great!

Chapter three is thematically labelled "principles of sports management". In this chapter, the educational consultant explains that sports principles are the basic laws on which the practice of sports management is built. He adds that management principles must therefore be based on general terms for them to be applicable within sport organisations of varying sizes and character. www.ladypalmranch.com