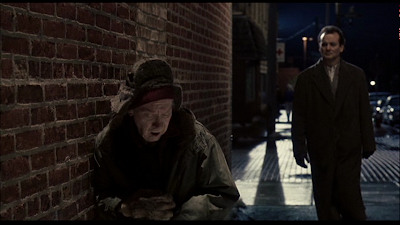 Groundhog Day is a classic example of a movie that follows the general 14-point structure of most stories that are about the solving of a large problem…and it’s also an example of how to incorporate specific pre-described psychological arcs into that structure. Phil’s journey mirrors not one but two psychological models. The story as a whole follows Elizabeth Kubler-Ross’s five stages of grief… 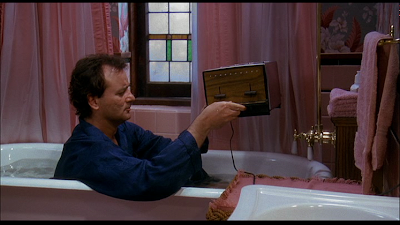 …but those last two steps can also be broken down further, because they mirror the “twelve steps” of Alcoholic’s Anonymous as described by that group’s founder “Bill W.”. We talked before about how Phil doesn’t have much chance to think about his past or make amends for past wrongs that pre-date what we see, but even within the movie’s narrowly-proscribed world, he pretty much manages to cover all 12:

Of course, it could well be that neither of these arcs was conscious on the part of the screenwriters, and that’s the beauty of it.  These thinkers were describing the nature of problem solving, and any well-written story about solving a similar problem will make the same discoveries on its own.  Ultimately, self-help gurus and writers are doing the same job: identifying the universal human nature underlying our problems.
Posted by Matt Bird at 8:00 PM

Another good case made for your view that story structure is discovered not imposed. Which reminds me to once again recommend Jonathan Gottschall's THE STORYTELLING ANIMAL.

Though I tend to agree with this idea -- in general and specifically with regard to this post -- I do wonder if the underlying "discovered/uncovered" structures tend to change much throughout human history, in different times and places. You could graph the GROUNDHOG DAY arc onto SCROOGED or even Dickens' original story, but neither Bill W's nor Kubler-Ross' insights would have played with Ancient Sumerians or cavemen, right? In part because they were likely preoccupied with different needs in their hierarchy. But also, perhaps, because their stories derived from fundamentally different concerns and cosmologies?

Ah, but the Sumerian epic "Gilgamesh" follows the Kubler-Ross arc more perfectly than maybe any other story ever!

I should have said Etruscan instead! Seriously, though, aren't there epochal limits to the universality of human experience? Would the Ancient Greeks, so adept at the separate forms of tragedy and comedy recognize themselves in a Woody Allen dramady? And what about the relatively recent Western notion of romantic love -- could anyone born before a certain date in history really relate to a contemporary Romcom?

I think that this is why some psychological models endure more than others. The better the model is, the more applicable it'll be, throughout space and time. In the movie we'll be looking at next week, I'll discussing what can "date" a movie (as in "this movie makes assumptions that we don't make any more"), as opposed to merely making that movie a portrait of its time.

I'll be interested to see what's coming. Though I do think that the larger the timespan, the more difficult it is to predict what assumptions we won't be making anymore. Or more difficult still, what new assumptions we might all share in the future (the Singularity probably won't be needing stories as we understand them now). This is why, I suppose, many of the most ancient and primitive tales still resonate. Lizard brain survival stuff -- like chasing or running from animals/monsters, defending one's turf or the comedy equivalent, the pratfall. But you wouldn't do very well trying to foist detective stories (rise of the cities, "civilizing" of the war of all against all into more limited interpersonal crime) or science fiction (the Industrial Revolution, the alienation of humans by our machines) on ancient agrarian nomads.

What a thrilling post, you have pointed out some excellent points, I as well believe this is a superb website. I have planned to visit it again and again. psicologo madrid arguelles