Books vs. Movies, Addendum: Sometimes Movies (Or, in This Case, TV) Can Go Places Books Can’t 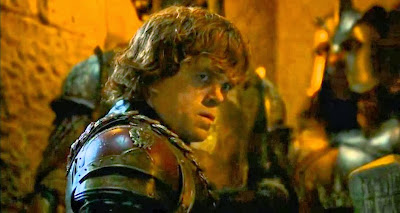 When it was first announced that “Game of Thrones” was being turned into a TV series, fans were excited but also dubious. How  could they create a fantasy world on a TV budget without greatly compromising it? Luckily, HBO ponied up a not-so-small fortune, and the showrunners proved to be quite adept at stretching that money’s value.

Inevitably, however, some sacrifices had to be made, most noticeably at the end of the first season, when we build up and up to the big battle...and then cut away. Next thing you know, Rob is riding up and saying, “Hey guys, we captured Jamie! Here he is!” The audience could only say, “Gee, that sounds exciting, wish we could have seen it.”

After the runaway success of the first season, HBO coughed up even more money, and the producers announced that the second season would show the big battle at the end, no matter how much it cost. Sure enough,  the big battle episode, adapted by George R. R. Martin himself, is pretty spectacular .

So now, it seems, TV was able to match the ability of books to go anywhere and show anything, no matter the budget...But wait, if you listen to Martin’s DVD commentary for that episode, you’ll discover that it actually managed to surpass what the book could do.

One thing that TV and movie directors have to learn is that the camera should never be objective. It’s not your job to back off and take in the whole scene. You have to choose which character the audience will identify with, and then privilege that character’s point of view, putting the camera over his or her shoulder as often as possible. This gives the audience a way to enter the scene.

But for prose this is even more true. It’s impossible, even if a book is written in third person, to write a scene without a point of view. A writer must provide not just sight and sound, but all five senses, and the only way to do that without going crazy is for the narrator to stick to one character’s perception for as long as possible.

In his commentary on the build-up to the battle, Martin notes various ways in which he likes this TV version better than his book. For one thing,  you can hear the war drums throughout. He laments that he can’t keep mentioning them over and over again on the page, so the reader forgets about them, but it adds a lot to have them keep building.

But then he mentions another advantage that never would have occurred to me: he actually got to go places on TV he couldn’t go in the books:
Martin’s books have hundreds of characters, but that doesn’t mean that he can tell his story from hundreds of points of view.  In TV (or movies), the camera can adopt the POV of a different character in each scene, but because the identification in a book is much stronger, it’s far more wrenching to make that jump.

Martin knew that once he had trained his readers to jump between Tyrion, Davos and Sansa, he couldn’t then jump away for just one scene from Bron’s POV....until he wrote the TV adaptation. Prose has an infinite special-effects budget, but the nature of prose point-of-view brings its own limitations.
Posted by Matt Bird at 8:03 PM