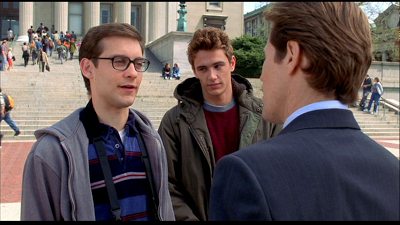 It’s an eternal conundrum: you have to reveal background information to the audience through dialogue, but you don’t want to force your characters to say things they wouldn’t actually say.

Spider-Man pulls this off well. They don’t force Peter to say, “By the way, I’m an orphan, and here’s how my parents died…”  Instead, he talks about it the way a real orphan does: When Norman Osborn tells him, “Your parents must be very proud,” he humbly responds, “Well, I live with my aunt and uncle and they are proud.”

This is how actual orphans talk.  They dance around the issue.  (Not coincidentally, this is how the character can get away with being so mopey without losing our sympathy: because he has some self respect.  We only pity him because he doesn’t ask for our pity.) Likewise, people in the CIA don’t say “I’m in the CIA”, they say “I work for the government.” People who go to Harvard often won’t say “I go to Harvard”, they’ll say “I go to a college in Boston.”  There are certain things that, for various reasons, people are reluctant to come right out and say.

These evasions make for good dialogue, because one of two things will happen:  Either the other person pushes for a straight-up answer, which creates conflict, or the other person figures it out and accepts it, which clues in the audience that we’re supposed to figure it out too.  Luckly, we love that moment—where we get to figure out something unsaid.

Don’t get me wrong.  It’s definitely possible to be too coy.  On the one hand, we all hate it when movies begin with a guy walking up to a girl and saying “So, sis, what’s going on?”, as if anyone says “sis”, but I hate “big house syndrome” even more.  You’ll find this in any Chekhov play, where all sorts of people live together in a big house with unclear relationships, and some are clearly friends of the family, but we don’t know which until some start sleeping with others.  I’m always so crazy trying to figure out what are all those people are doing there that I can’t follow the story.

But the Spider-Man example is a good middle-ground.  Peter says it in a way where he doesn’t have to say it, but we still get it.

Even more amazing is “Game of Thrones”. The cast is incredibly large and out-Chekhov’s Chekhov with the complex relationships and backstories of everyone who lives in the two big castles, but the TV adapters somehow makes everything very clear very quickly, without a lot of awkward dialogue. (Although, come to think of it, even there, there might be a “so, Sis…” line between Lena Headey and her brother when they first appear.)
Posted by Matt Bird at 12:49 PM

I think this post has a point up to a point. You don't want on the nose exposition cluttering up SPIDERMAN. Nor is that movie the kind of story in which sussing out the relationships among all of those under the roof of a big house is part of the experience of the story. But I'd say in Chekhov's plays and in other sorts of films, it kind of is. The reasons the relationships are seem ambiguous, fluid, shifting/shifty, etc. to the audience is because that's they way they feel for the characters and that's an important part of what the story is about. Likewise in a more intelligent and rigorous procedural like ZERO DARK THIRTY where everyone doesn't come right out and state their name, rank and qualifications, like they wouldn't in real life and like they do in too many lesser action/adventure/thriller flicks.

Naturally I don't mind ambiguous relationships when they're ambiguous to the character's themselves...On the other hand, when everybody knows who everybody is within the story, but the audience can't figure it out, then the writer hasn't done his or her job well enough, in my opinion.

(But I didn't mean to imply that Spider-Man or Game of Thrones is better than Chekhov!)

There are also the kind of characters for whom it is *in character* to come out and say something on the nose -- especially if it gets them closer to their goal -- for instance, when Max Fischer in Rushmore reverse-grandiosely murmurs something along the lines of, "I'm a barber's son."


The classic line, much too obvious to be used any more, is "Here she comes now!"

Chekhov has the disadvantage of the Russian custom of using patronymic last names. It is very difficult to sort out who's who, even in a Russian novel, where the author is free to use exposition.