Now You Can Revise, Part 5: Set Up More of Your Pay-Offs 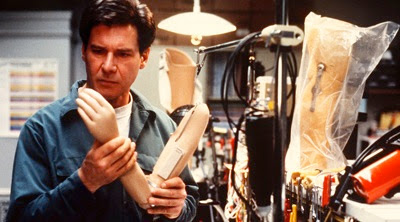 It took me a long time to realize that heroes need special skills.  You can’t just start out with a blank-slate everyman who encounters a problem and solves it by reacting in the way that anyone would.

Instead, the hero must rely on a specific set of special skills that pre-date the movie.  Harrison Ford in The Fugitive was a doctor, so he finds ways to use his medical skills to clear his name.  Will Smith in Enemy of the State is a lawyer, so he uses those skills to get the NSA off his back. Neither one of them suddenly busts out with kung fu moves...

In those cases, the heroes made use of their day jobs, but often you’ll find that those aren’t enough to get the hero out of every scrape, and the hero suddenly need a heretofore unmentioned skill in order to overcome a specific obstacle.  Each time this happens, you can stop, go back, and pre-plant a reason those skills exist, or you can do what I do: just keep going, and fix it later.

You wrote your screenplay by going forwards, but now’s your chance to re-write it backwards.  Set up a plant for every pay-off, so that, as the audience gets to gets to each twist, they’ll say “Ah ha!” instead of “Yeah, right!” 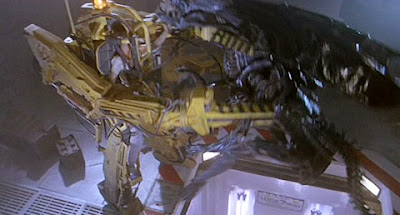 The trick with pre-establishing special skills is to do it subtly and organically.  Here are contrasting examples:
You can also write backwards to pre-establish things that will go wrong for your hero.  A recent episode of “Breaking Bad” began with an odd little scene establishing that a young boy was motor-biking around the collecting spiders.  The audience then forgot all about it until he showed up later, at the worst possible time.  (This also provided a nice visual thematic metaphor: you can’t bottle up evil for long.) 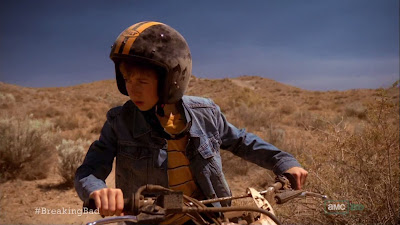 This is why, as per the breakdown I got from Simon Kinberg, producers are so focused on the amount of plant-and-pay-off in your script: it shows that you literally know your stuff backwards and forwards, that you’ve been circumspect, tightened all the screws and battoned down the hatches.  This assures them that the script won’t fall apart under pressure.

*Referring back to the debate in the comments of this post, this is another reason why I allow myself to make minor decisions, such as the hero’s previous jobs or the spouse’s expertise, somewhat randomly as I write the story, instead of trying to make every detail thematically significant in the first draft.  I often have to change those details later in order to shore up developments in the plot, and I would be reluctant to do so if I had already made them thematically significant.
Posted by Matt Bird at 8:23 PM

Labels: Alien, Now You Can Revise

This one took me a few scripts to learn and it was so freeing when I did. If you just keep going you can always go back to the beginning later to set up anything. No need to stop and start or get bogged down in tinkering with an early draft.

And the best set-ups, like your ALIENS and BREAKING BAD examples, are akin to the parts of the trick the magician doesn't want you to notice, classic early moments of misdirection when it doesn't even feel like he's started performing yet.

Still conflicted about waiting on theme, though. Even some of your examples above tend to belie the wisdom of this. I guess I'm thinking specifically of how episodes of great, literate shows like MAD MEN and BREAKING BAD get boarded/beated out. I've seen footage of the writers' room from shows like THE SHIELD and while the main focus is often on getting the story down, nobody ever stops talking about what the episode is about and how the B, C and D stories might support and reflect the theme(s) of the A story. There's a constant fluid give and take between the questions of "what happens next?" and "what is this about?" Characters may end up learning different lessons from the ones the writers set out thinking they might at the beginning but the lessons are rarely in radically different areas of human experience, totally unrelated to the original concept.

I would say that regular-season TV episodes are different. The characters are already beloved, an ongoing source of reliable conflict is already well established and there's already an pre-won-over audience. Those are exactly the things I'm too busy worrying about in the first draft of a screenplay instead of the theme. Besides, in TV, it's too late to change the hero's past or the spouse's job.

One interesting example from TV: On the show Falling Skies, they had intended the love interest to be a former art dealer (as an attempt to show how obsolete some people would feel after armageddon), but they quickly realized that she had nothing to do in most of the episodes, so they turned her into a pediatrician to give her some special skills and reason to take part in more stories. Luckily, they still had time to re-shoot a few scenes in the pilot to change her job retroactively. Most shows don't have that option.