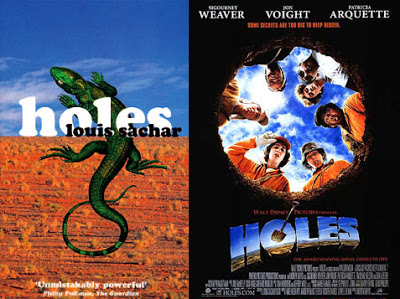 When my wife held her big “Top 100 Chapter Books” poll, the most recent book in the top ten was “Holes” by Louis Sachar.  Since being released in 1997, that book has become an instant classic, and with good reason.  What starts as a simple, silly story about juvenile delinquents digging holes in the Texas desert subtly expands until it become an epic folk-tale about the hidden costs of bigotry throughout American history.

When they made it into a movie two years later, Sachar himself wrote the screenplay, which elegantly pares the story down to two hours, and director Andrew Davis (The Fugitive) did a good job making the magic-realist world of the book come alive in a believable way… but the movie just doesn’t have the same power.

The problem here is, once again, that all behavior looks worse onscreen.  In this case, that meant that the movie had to cut out a small, key moment.

In both the book and the movie, poor white kid Stanley is falsely accused of stealing a pair of sneakers and sent to a sinister boot camp where each kid has to dig a five-foot deep hole every day. Stanley isn’t very good at it, but there’s a black kid named Zero who is. Stanley offers to teach Zero to read if Zero will help Stanley finish his hole every day after he’s done with his own.

But there’s an additional development in the book that passes by so quickly that we barely think about it at the time, because Stanley barely thinks about it: at some point Stanley realizes that, since Zero is so much better at digging, he’ll just let Zero dig by himself while he sits by the hole, preparing his reading lesson.

The moviemakers were in a bind.  They knew that if they included that brief scene we’d see what Stanley doesn’t: how bad it looks when he doesn’t shovel. The white guy knows how to read, so the black guys have to dig their holes and his too while he sits around. Had the audience seen that, Stanley might have become too become unsympathetic.

So they kept Stanley in the hole with Zero, and most viewers didn’t consciously notice that it was different from the book…but I think that the movie lost a lot of the book’s meaning as a result.  One thing that the book did so well was to show how a good kid unintentionally benefits from his class status in ways that subtly harmed both himself and those around him.

In the end, Stanley discovers that his family is cursed because his ancestor exploited the physical labor of Zero’s ancestor and never repaid the debt, and Stanley can only end the curse and make reparations by heroically returning the favor with his own physical labor.  It seems absolutely essential to me that you need to show the moment when Stanley unconsciously repeats that original sin that caused that curse.

The book, by keeping us in Stanley’s head, can slip the injustice of that moment past us without letting it sink in yet.  A movie can’t do that.  This is one reason why movie heroes tend to be much more heroic than book characters, even if that harms the theme of the movie.  Movie heroes are under a lot of pressure to stay on the straight and narrow, because all behavior looks worse onscreen.
Posted by Matt Bird at 10:37 PM

Oh wow. You are so right!

But would it have hurt to show that? It would have looked bad, but showing him realizing that injustice and making up for it would have returned the balance back to sympathetic.

Which leads to another interesting question: how far can a lead character swing from bad to good before an audience loses interest in him?

I wish they had shown it, and I'd like to think they could have gotten away with it, but I can see how Disney would be skittish to do so. Americans hate to see racial insensitivity appear onscreen without being instantly condemned ...because of the fact that almost all of us are racially insensitive ourselves and we hate to see how it looks.

I love it when characters progress from genuinely bad to good (as opposed to merely redeeming a selfish character). Christian Bale in The Fighter and Prez in the first season of The Wire are great examples.

Double wow. I'd forgotten all about that lost moment from the book!

On the subject of movies vs. books -- any plans to (eventually) write about the CLOUD ATLAS adaptation? Obviously it's not even released yet but I have a feeling it'll be interesting fodder for discussion, what with being a difficult adaptation, etc.

I tend to be equally incapable of tackling long books and long movies, so I haven't read it. But damn, that was a great trailer. I've seen it three times and I teared up every time. And I certainly admire their willingness to actually adapt the material (coming up with a whole new intercutting scheme, for instance, according to the New Yorker), rather than just bragging about how "faithful" they were.